Kyle shares the up-and-coming names you need to know for fantasy baseball. 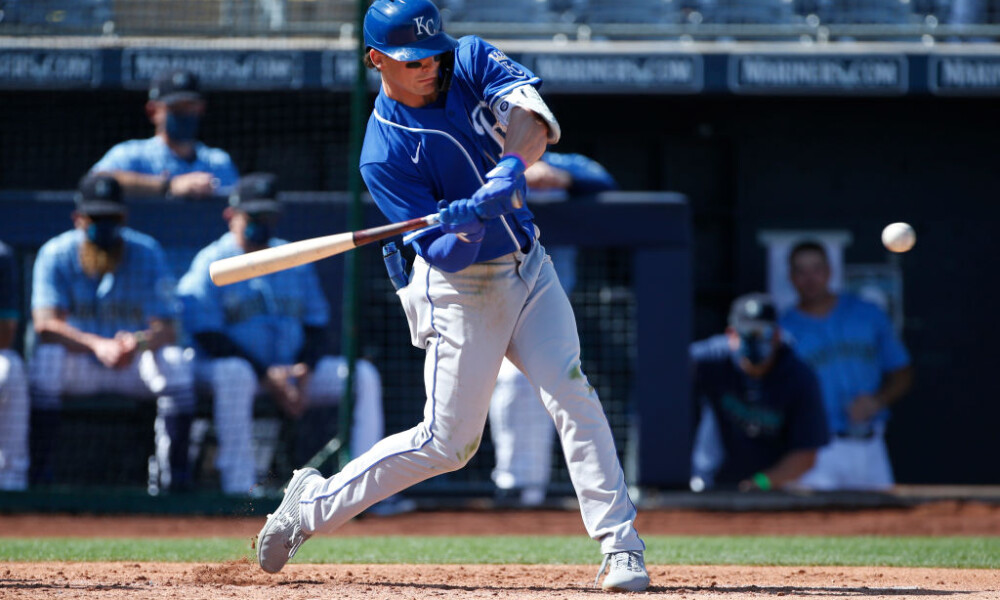 The top prospect in MLB is poised to make the Opening Day roster with the Kansas City Royals. Witt has made his way through the minors with a slash line of .283/.350/.520. He played shortstop a majority of his minor league career, but the Royals have shifted focus, having Witt get numerous reps at third base. This Spring, Witt has been penciled in at third where he has dominated pitching, slashing .438/.438/.875 and leading the Royals with two home runs and collecting 14 total bases. His current ADP sits around the 91st pick, and he’s a must-own in all league formats. Witt’s defined swing has been MLB-ready for some time, and he should easily eclipse 20 home runs and 20 stolen bases. His swing mechanics have been compared to Mike Trout, and a realistic MLB comparison could be Trea Turner. While Witt Jr. may not possess Turner’s speed, he does have the ability to steal bases and he should provide similar, if not better, power numbers than Turner.

Rutschman was destined to open the season as the Orioles’ starting catcher, but a strained tricep looks to keep him off the Opening Day roster. However, once he’s healthy and gets a few reps at AAA, he should get the call by late May. During last season, Rutschman hammered pitching at AA and AAA, slashing .285/.397/.502 with 23 home runs. One thing to note is Rutschman’s keen sense of the strike zone, he accumulated 79 walks to only 90 strikeouts. His ADP has seen him drafted in the early half of the 16th round. Naturally, fantasy owners will want another option for the first month, or two, of the season, but once he gets his call, there won’t be a need to carry another catcher. The fact that he’s a switch-hitting catcher brings even more desire to fantasy teams.

Torkelson has put together a solid Spring Training (.278/.381/.444) and looks to open the season as the starting first baseman for the Tigers. Last season, Torkelson was one of the top minor league hitters finishing the season with a slash line of .267/.383/.552 with 30 home runs and 91 RBI. One thing to monitor is how he handles Major League pitchers that get ahead of him as he did strikeout at a 26% rate. However, the Tigers will give him all the at-bats he needs, and the power he possesses should play well for fantasy teams. His 256 ADP is the lowest it will ever be, and he is a great option for a late-round pick that could produce well above his ADP.

Mechanical issues hindered Gore’s chances of making his debut last season, however he worked on his mechanics and finished the season with a respectable 3.93 ERA, in 50.1 innings of work, despite issuing 28 walks. Fast-forward to this spring, and Gore could earn himself a spot in the back end of the Padres rotation. Through two starts in Spring Training, Gore has seven strikeouts and zero earned runs while surrendering only one hit. Many leagues see him going undrafted, but he could provide extreme value as a late-round pick. Expectations should be tempered, but assuming his mechanics become easily repeated, he could be in store for a solid workload for a Padres team that needs its starting pitching to come through.

Baz underwent elbow surgery on March 21st to remove loose bodies, and his ADP has slid from the 11th round of fantasy drafts. Estimates suggest he will miss 2-3 weeks before he can begin rehab, and this could push Baz’s 2022 debut until June. Still, once healthy, there’s a lot to be excited about with Baz. It was a small sample size last season, but the righty showed strikeout ability accumulating 18 in just over 13 innings of work. The only three runs he allowed were all solo home runs. Once he arrives, expect big things from Baz, as he tore through minor-league hitting in 2021 striking out 113 batters in just under 80 IP and finishing the season with a miniscule 2.06 ERA and 0.80 WHIP. He will have his work cut out for him pitching in the AL East, but the talent is apparent.

Lodolo looks like a favorite to land the last starting spot in the Reds rotation. The former first round pick has proved everything he needs to in the Minors, having finished the 2021 season with a 2.31 ERA and 0.96 WHIP. Undrafted in almost every league, Lodolo could start sliding into the final rounds if the Reds make the announcement he has earned a spot in the rotation before drafts conclude. While Lodolo may not be a league-leader in strikeouts, his command of the strike zone should play well into keeping hitters off bases. If you see him on waivers, keep tabs on him as he could be a solid option for teams needing immediate help to their starting rotation.