While everyone searches for the next young breakout stud, Bryan has identified three veteran WRs with proven production ability that are being severely undervalued in fantasy drafts. 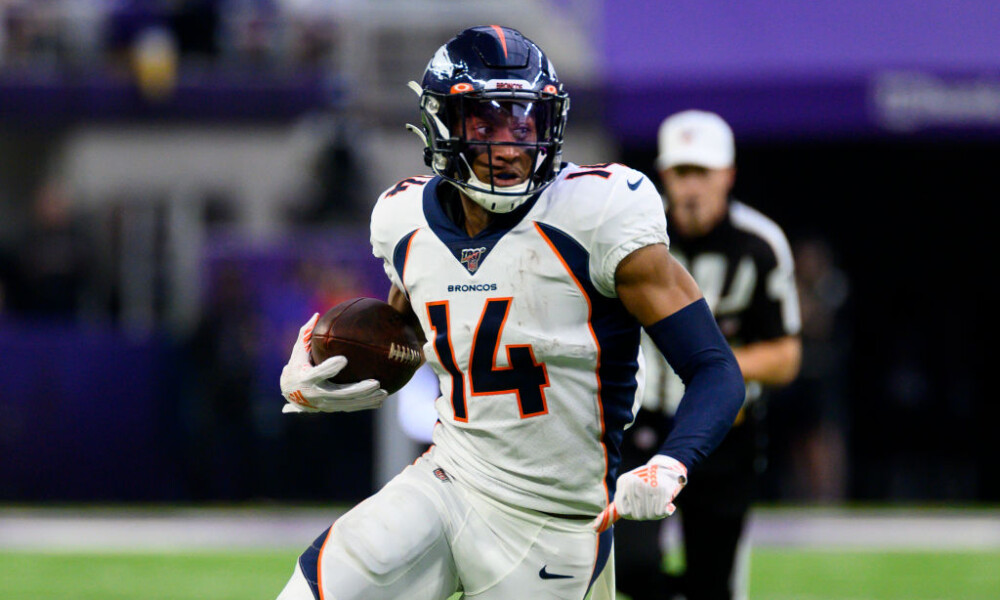 Prior to the 2021 season, it was easy for fantasy football managers to fall in love with Brandon Aiyuk. The 49ers wide receiver had a terrific rookie campaign, compiling nearly 800 total yards in just 12 games. Entering his sophomore season, with an innovative mind like Kyle Shannahan calling plays, Aiyuk’s ADP of 66 made him a tempting mid-round target. However, things didn’t go as planned.

While Aiyuk did salvage his season in the second half, he recorded just 96 receiving yards over his first seven games. Stuck in a crowded depth chart with targets like George Kittle and Deebo Samuel healthy, a decline in performance probably should have been expected. Regardless, for many of those who expected him to be a key contributor, Aiyuk’s second-half surge wasn’t enough to overcome an inability to deliver on his sky-high potential.

A pick that likely garnered far less fanfare in fantasy leagues was Brandin Cooks, selected with an ADP of 97, below names like Robby Anderson and DJ Chark Jr. While he was fresh off a great season with the Texans, the Houston offense was expected to struggle mightily without Deshaun Watson, especially because Cooks was the team’s only real playmaker. Cooks ended up rewarding those who took a chance with yet another 1,000-yard campaign, his sixth in eight seasons as a pro. It wasn’t flashy, but teams that drafted Cooks as a reliable flex option got the overall WR20 in PPR leagues, far better value than Aiyuk, who ended the year as WR35.

It might not be that fun or what managers had in mind pre-draft, but the so-called ‘boring’ picks often make up the nucleus of a championship winner. This isn’t to say gambling on young talent is unwise, but a solid floor is valuable in a sport as volatile year-to-year as football. Keep an eye out for these slept-on veterans that can produce from day one for your team.

Yes, I know. Hold your laughter. Kenny Golladay’s first season in New York couldn’t have gone any worse. The former Detroit Lion signed a big contract with the Giants in the offseason, but a combination of putrid play calling, inconsistent quarterback play and nagging injuries contributed to a nightmarish zero touchdowns over 14 games. Entering 2022, it’s hard to envision the former Pro Bowler’s stock dropping any further than it already has. He’s the current WR54 in PPR league ADP, beneath Corey Davis and Chark Jr. and just one spot above Marquez Valdes-Scantling.

Here’s the upside for Golladay: New head coach Brian Daboll is a terrific offensive play caller, Daniel Jones is back after missing a third of his games last season (top-20 fantasy QB when healthy) and New York made significant investments into their offensive line. With more time to throw and another offseason to work together, Jones, a solid deep-ball passer, should be able to find Golladay downfield more often. If it’s another bust of a season for Golladay, fantasy managers can move on with little regrets, but it’s hard to ignore his talent even if the past two seasons haven’t gone to plan. Few receivers that can be had past Round 10 possess Golladay’s pedigree and opportunity; this is a buy-low that could lead to big rewards.

Sticking in the NFC East, Gallup had an unfortunate 2021 season that saw him return from injury in the second half only to tear his ACL in Week 17. When healthy, Gallup was a solid third wideout for the Cowboys, scoring nine fantasy points or better in five of the nine weeks he played. While never an elite option in PPR leagues, Gallup has always been a quality real life receiver, averaging over 52 yards per game for his career. Dallas’ front office seemed to think so as well, rewarding the 26-year old with a five-year contract this offseason.

With all that said, Gallup’s value in 2022 has more to do with those around him. Amari Cooper was traded away to the Cleveland Browns, leaving Dallas’ depth chart at wide receiver thin after CeeDee Lamb. Playing with Dak Prescott and the NFL's top passing offense should  ensure Gallup gets plenty of targets and receptions. In 2019, the last time he had a major role in the 'Boys offense, Gallup was WR22; his preseason rank for 2022 is currently WR44. The talent, pedigree and supporting cast all suggest a career year.

Like Gallup, Sutton’s career has been somewhat up and down, with his natural talent often overshadowed by injuries and inconsistent play. Broncos fans were likely hoping for a return to his 2019 Pro Bowl form in 2021, but the fifth-year receiver had a fairly pedestrian season, racking up 776 receiving yards and two touchdowns over 17 games. However, if you look beneath the surface, it’s clear that Denver’s offense did Sutton no favors. Run-heavy play calling and a middling game-manager at quarterback in Teddy Bridgewater meant limited opportunities for Sutton, especially once wide receiver Jerry Jeudy returned from injury in Week 8. Sutton’s average targets per game declined from eight to just four after the team’s first seven games.

Jerry Jeudy isn’t going anywhere; in fact, he’s a pass catcher that I’m very high on for 2022. What has changed is the quarterback position in Denver, where Russell Wilson steps in to give the Broncos a major upgrade. Under new head coach Nathaniel Hackett, the offense should be a stark contrast from the grind ’em out, run-first 2021 scheme. While he was already due for some positive touchdown regression, the arrivals of Wilson and Hackett should open up the offense and give Sutton the most volume of his career. Keep in mind that in his final two years with the Seahawks, Wilson’s top targets (DK Metcalf and Tyler Lockett) were both top-25 wide receivers in PPR leagues, so there’s plenty of room for Jeudy and Sutton to coexist. Considering Sutton’s first 1,000-yard season came with Drew Lock and Joe Flacco under center, his current WR40 status could look silly by December.