The Fantasy Football Case For (And Against) Daniel Jones

Bryan looks at the viability of Daniel Jones as a starter for your fantasy football teams. 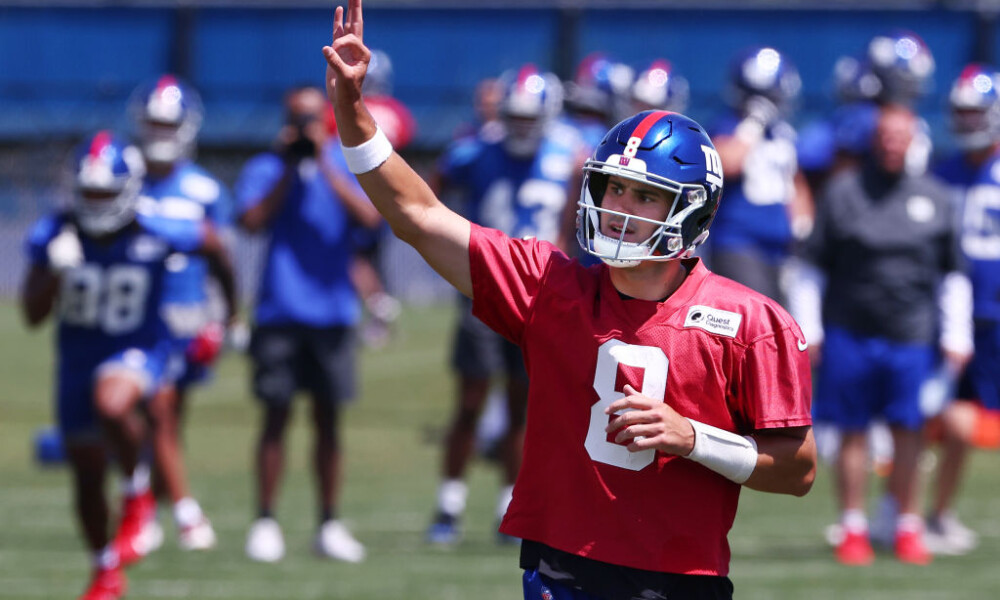 Daniel Jones is an enigma. To most, he’s a bust, taken with the sixth overall pick in the 2019 draft during Dave Gettleman’s disastrous tenure as Giants general manager. To an increasingly select few, he’s a talented quarterback that hasn’t been given the opportunity to grow due to a horrendous supporting cast.

Wherever one believes, Jones sits on the Dalton Scale as a real-life quarterback, and his fantasy value is just as contested. Let’s take a look at why you should, and why you shouldn’t, take a shot on this polarizing quarterback.

Daniel Jones has been plagued by turnovers since entering the league, but his reputation amongst fans may outweigh reality. In 2019, his 12 interceptions and 19 fumbles in just 12 games made Danny Dimes a liability in the pocket. However, since 2020 Jones is just 15th among all QBs in turnovers. While part of this can be attributed to injuries that forced him to miss games, he’s only 11th in interception rate. It’s not a great mark, but a clear improvement from his first season.

A consistently porous Giants offensive line has made things difficult as well. Since entering the league, Jones is sixth in total sacks while playing seven fewer games than any quarterback in the top five. With two promising young tackles in Evan Neal and Andrew Thomas, along with free agent signing Mark Glowinski at guard, New York’s front should be at its best in years. Extra time to throw should lead to far better results, as Jones has shown in the past he can be an elite deep-ball passer when given the opportunity. It helps that receivers such as Kenny Golladay and Darius Slayton, while certainly not perfect, are at their best when stretching the field.

As a passer, Jones has improved since his 24 touchdown-12 interception rookie year, according to PFF. However, those marks reflect a far more conservative Giants offense under Joe Judge, with offensive coordinator Jason Garrett typically scheming up ways that Jones might not turn the ball over, rather than being aggressive. New head coach Brian Daboll is a far more innovative play-caller than Garrett, having had great success with another physically impressive signal-caller in Josh Allen. With a decent group of weapons and an upgraded offensive line, expect more big plays for Jones.

What truly sets Jones apart from other middling quarterbacks is his running ability. Since 2019, his 5.8 yards per carry is second best for all quarterbacks, behind only Lamar Jackson. While that number dipped to just 4.8 in 2021, Jones’ average rushing attempts rose from 4.6 in 2020 to 5.6. Since being drafted by the Bills, Allen has averaged nearly seven rushes per game. That seems to imply that Jones’ running will be utilized just as much by the new coaching staff, if not more. One of the game’s best dual-threats should see more production than ever on the ground in 2022, something that can’t be said about most quarterbacks outside the top 12.

Jones’ turnover issues are still a factor in his fantasy outlook, but the biggest concern fantasy managers should have is his touchdown production. Over his last 25 games, Jones has just 21 touchdowns and 17 interceptions. While part of this can be blamed on the duo of Judge and Garrett, who seemed to prioritize field goals over potential points, the third-year quarterback deserves his share of the blame too. Over his last two seasons, Jones has an anemic 46% completion percentage inside the redzone.

Is Jones capable of putting the ball in the end zone? Certainly. He had 12 touchdowns and 0 interceptions inside the red zone back in 2019, but that was three years ago and two coaching staffs ago. We still have yet to see if he can combine his big arm with a more risk-averse style of play. Entering his fourth year in the NFL, it’s hard to feel confident Jones’ talent will lead to success, especially since he has to learn a new playbook and offensive scheme for the third time in his young career.

Much of the optimism around Jones lies with a better supporting cast, but the name value might outweigh the actual ability of his teammates. Saquon Barkley has been injury-prone and inefficient since his fantastic rookie campaign, Kenny Golladay and Darius Slayton took a major step back in 2021, and Sterling Shepard and Kadarius Toney are injury risks out of the slot. The offensive line, while better, will still struggle to keep the pocket clean consistently, especially in the pocket. It’s also worth mentioning that Jones is a bit of an injury concern; he’s missed time over the past two seasons due to nagging hamstring issues and, in 2021, a concussion. It’s something managers will have to monitor, which may not be worth it for someone who, depending on the league, probably won’t be starting.

Grabbing Daniel Jones shouldn’t cost much for managers in standard leagues.* With an ADP hovering around 200, he can be had somewhere between the 18th-20th rounds of drafts, if not further. For the discounted price, this is a steal. Rather than banking on a more boring backup QB, like Carson Wentz, Kenny Pickett, or Jared Goff, Jones presents an intriguing option to get a player that has proven he can produce when healthy (QB19 last season in average fantasy points per game). A new coach, improved offensive line, and better play at wide receiver are all reasonable expectations that should only help. Jones might not be a league-winner, but this is a fantasy backup with greater upside than most outside of the top 15 QBs.

* In a 2-QB league, Jones is a legitimate starter that could allow managers to bolster other positions first. Grab him before the 12th round, if not sooner.