Jayson Braddock looks at the strengths and weaknesses of some of the top prospects entering the 2021 NBA Draft. 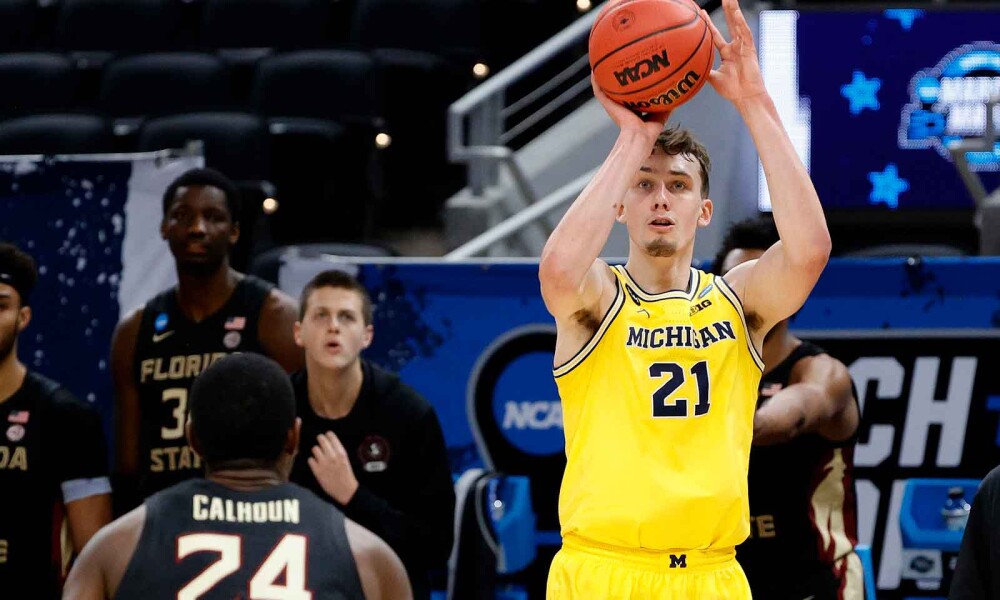 The 2021 NBA Draft is July 29, 2021. There are numerous prospects that could have an immediate impact on fantasy teams. Where the top 40 prospects land will be particularly interesting as it could boost or hurt their immediate value.

Here are prospects 21-30 heading into the 2021 NBA draft as well as where they will instantly impact their new squads and a few areas they will need to improve upon post-draft.

He’s good as a cutter off-ball and has a nice stepback as well. He shoots with a good vertical inside of the three-point line. Bouknight is a downhill attacker, who is also a good shooter coming off of the curl. He moves well laterally on defense.

He is a playground hooper that will be a volume shooter in the NBA. He has a scorer’s mentality which often leads him to take bad shots while ignoring the wide-open teammate. He’ll need to add to his frame as he’s constantly falling over. Bouknight is a reactionary defender.

He’s a great transition scorer who is strong and balanced when driving but also loves the elbow pull-up. Springer is a high IQ defender with great awareness. Defensively he plays low and active, mirrors laterally smooth with great hand-eye coordination on-ball.

He lacks great handles, struggles for space in iso, pushes his three-ball and his shot technique in the mid-range often changes as he has little feel for it. Defensively he likes to gamble at times and gets out of position.

Grimes is fluent in every type of three-point ball and has great technique on his shot. He easily has NBA range and his form doesn’t change when contested. He’s a smart rebounder that crashes the boards on both ends. Defensively he has active feet, lateral quickness, and has fluid hips.

In the mid-range, his body is out of whack as he doesn’t square up. He struggles to win iso with subpar handles and shake. Grimes has no touch on his floater and also needs to develop his left hand for handles and scoring. His passing lacks crispness.

Defensively, he’s great laterally, plays with good bend, quick hips and great change of direction. McBride attaches to ball handlers on screens and contests shots wisely. He’s a quality passer off the pick and roll, is a lob threat backdoor, and can get to his spot as a shooter.

McBride will shy away from attacking defenders at the rim as he struggles to finish due to his inability to take contact, while also needing to elevate more. His elevation on his threes is inconsistent and he’ll toss contested threes by throwing arms and legs forward.

He’s good laterally on defense, stays active, and is smart on closeouts. He’s a high IQ player that makes up for stiffness with anticipation as a defender. He’s also a talented help-side defender. Wagner is a great passer out of the pick and roll, an effective off-ball cutter, and has good potential on catch and shoot threes.

Wagner doesn’t create separation off of the dribble, can’t create his own shot and doesn’t finish with his left hand, and rarely attacks to his left, which allows defenders to sit on his moves. His change of direction is deathly slow.

Murphy had tons of open threes at Virginia which he hit at a high rate, with many coming from the corners.  He moves to the weak spot on catch-and-shoot threes. He uses his length in unison with lateral ability. He has a smooth kick, fluid hips, and contests well with length.

Murphy lacks great handles, struggles to win the edge, and lacks passing ability as he’s reactionary and slow. He doesn’t have much vertical on his jump shots, while also loading the ball heavily to the right side of his face and pushing up. His shot technique costs him on contested shots.

His length, lateral ability, fluidity, and smarts should allow him to switch everything. He’s versatile as a pick-and-roll defender (does it all) and understands spacing when he’s taking on two-on-ones defensively. A rim protector that blocks shots with a vengeance. He is fluid and wiry, which should lead to him being a quality paint scorer.

He’ll need to add bulk to his frame and consistently knock down shots from 15 feet and in. He gets silly fouls and turnovers, leaves his feet too often depending on length, and leaping to save him as he gets bullied by big-body centers.

He’s good in the pick and roll as a passer or a shooter. Butler uses short, quick dribbles to beat his man, has pull-up ability from three, and is smart to relocate to the weak spot on the perimeter. Butler routinely shot and hit from 25+ feet in college. He’s active on defense and good laterally.

Butler is not explosive and will have trouble finishing at the rim in the NBA. His floater needs touch as it’s just a one-hand push shot. Despite hitting 41.6% on threes, his shot is pushed out in front of his face at a low trajectory. He’ll also have issues in switching at the next level.

He’s a big, long athlete that shows great awareness on defense. He closes out and contests without fouling and shows the ability to switch well. He uses his length and awareness in passing lanes. He’ll show flashes of a smooth turnaround.

Thor plays timidly with the ball in his hands as a passer and a scorer. He’s not a talented dribbler as his dribbles are long and slow. He lacks strong hands as the ball is routinely knocked out. His three-ball has to be reworked. Thor is ready as a defender but is several years away on offense.

Cooper has quarterback vision with the ball in his hands. He controls the game in transition, seeing the entire floor while toying with defenders with his handles. He’s an active defender that’s good laterally. He generates points as a passer and a scorer in transition and at the rim and foul line.

He’ll need to finish better at the rim. He gets smothered due to a lack of size/length. His floater doesn’t have touch and his three-ball is bad as he gets a minimum lift and tilts back. He’s a slow shooter with a tell (tilt). He will have to reduce his turnovers on pick and roll passes.