Jayson Braddock looks at the strengths and weaknesses of some of the the top prospects entering the 2021 NBA Draft. 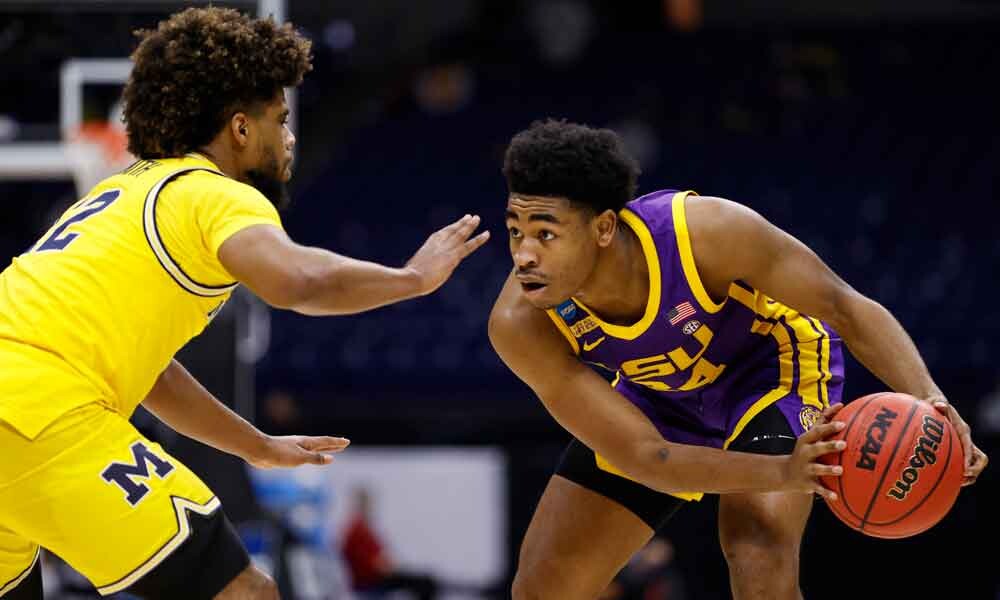 The 2021 NBA Draft is July 29, 2021. There are numerous prospects that could have an immediate impact on fantasy teams. Where the top 40 prospects land will be particularly interesting as it could boost or hurt their immediate value.

Here are prospects 31-40 heading into the 2021 NBA draft as well as where they will instantly impact their new squads and a few areas they will need to improve upon post-draft.

He’s a high IQ defender that plays with his chest out, knees bent, and contests vertically. He wins off the dribble by going at the defender’s closed hip. He has good feet on post moves, while also being a good passer out of the post.

Robinson-Earl isn’t overly athletic or explosive. He’ll need to add more moves than his spin to win in iso against NBA PFs. His hips aren’t quick enough for NBA guards and he’ll over pursue in closeouts at times.

He understands hedging on both sides of the floor. He gets out quickly in transition and as a pick and roller. Bassey is a good help-side defender and despite his percentages, his three-ball technique was better than expected.

He’ll need to be a better facilitator in the paint and have stronger hands when help defense comes. His passes lack accuracy, his handles need to be better and he doesn’t create his own shot outside of the paint.

Thomas has a unique ability to contort his body, draw a foul, and still hit the shot. He takes contact well and hits close to 90% on FTs. He gets great lift on his shot all over the floor. He has a smooth stepback, a dangerous turnaround shot, and pivot game.

Thomas’ shot works from the left side of his head to above his face for release. He struggles to win the edge as he’s not explosive or fast. He’s not an anticipatory passer, falls asleep on defense, and over pursues or jogs to closeouts.

He shows flashes of good, quick feet in the low post. He’s a maniac on the boards at both ends or the floor, immediately looking to box out and explode upon the shot. He has heavy hands like a defensive end to pop opposing players out of his way in the lane.

He’s not a shooter, at all. He plays flat-footed on defense outside of the paint and over his toes. Sharpe has too many turnovers, and makes predetermined passes, despite the coverage and they lack accuracy and touch. He has to improve dribbling and not get rattled by help defense.

He has great length and size, moves laterally with ease, and has the frame and quickness to develop into a sticky defender. He has good quickness to win iso and is dangerous with his hesitation. He gets immense spacing in stepback and side steps shots.

Nothing he does is crisp outside of stepback, he’s not anticipatory and doesn’t take contact well in the paint. His touch shot has no touch and he has no knack for the creative, contested finish. Williams looks at the floor too often when dribbling and is only a right-handed passer/scorer. He’s not a natural shooter and the ball floats on his handles.

He’s decent laterally but not great. He has good length to contest shots. He always squares his body for the shot.

Primo struggles to win the edge. He’s not explosive at the rim or built to take contact. He’s a right-hand-only player and NBA range will be an adjustment for his three-point shots.

He has an explosive, huge first step. He’s great in transition with decent handles for his size and attacks with length. He finishes well with his left or right hand around the rim or the post. He also has nice touch on his baby hook.

Prkacin doesn’t move well laterally and his change of direction is lacking. He makes too many careless mistakes, including not passing to the open teammate so that he can take a bad shot or attack the rim. He flings his mid-range and three-point shot rather than shooting it.

He uses his length well in most phases of his game. He’s a smart pick and roll passer that understands spacing. Ayayi is smooth and smart with his finishes at the rim, has nice touch on his floater, and has a nice three-point shot with NBA range with perfect wrist action.

He can be too reliant on length, plays upright, and gets stuck on picks. He struggles to win the edge and doesn’t trust his left to consistently pass or score. He needs to speed up his shot off of the dribble as well.

He changes his pace well on the dribble to win in iso. He displays a nice pull-up off the dribble. At the rim, he typically finishes with a right-hand finger roll.

Dosunmu goes predominantly to his right, has sub-par handles for an NBA guard, and is a reactionary passer. He’s a one-read quarterback as a passer that throws to that read regardless of coverage. He’s decent laterally but gets his hands on the ball handler too often. His shot is jacked up, from the wrist to the release point and even the guide hand.

He’s a complete passer in all phases and throws the most efficient pass possible with his right hand. He has a nice floater and catch-and-shoot ability.

His change of direction is lacking as he struggles to win the edge or stay with ball handlers. He overpursues on closeouts. He plays high, flat, and without fluidity. He doesn’t shoot well off the dribble or on contested shots. He’s not explosive enough to consistently beat NBA athletes at the rim. He lacks control and comfort with his left on passes and shots.