T.J. Hockenson and Kyle Pitts are battling it out in ADP, but Jayson Braddock says there is a clear-cut winner you need to draft. 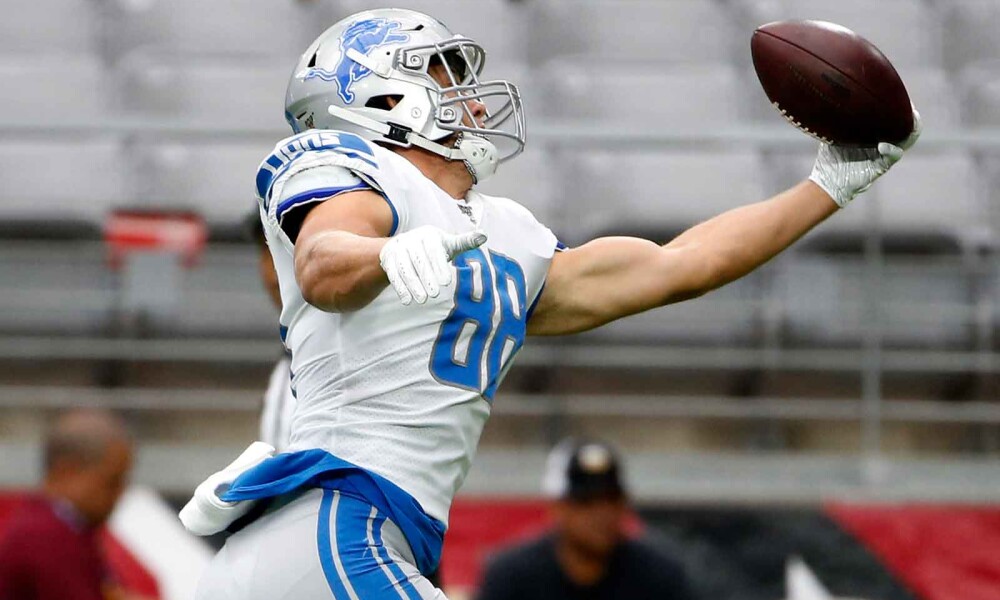 Yesterday I wrote about George Kittle and Darren Waller while discussing who will be the guy to finish behind Travis Kelce as the second-highest producer in fantasy from the tight end position in 2021. In that article, I mentioned that Mark Andrews, Kyle Pitts, and T.J. Hockenson were among Kittle and Waller as the consensus top-five tight ends after Kelce comes off of the board.

While many love Mark Andrews after he scored 17 touchdowns over the last two seasons in Baltimore, the consensus fourth tight end at DrRoto.com is Kyle Pitts. I actually differ from our consensus with Hockenson being my fourth-ranked tight end and Pitts following him as the fifth.

It’s a close call to be sure. Let’s dive into breaking this down by starting with the tale of the tape.

They are both anomalies at the tight end position. In the last 40 years, only two other tight ends have been drafted in the top eight picks of the NFL Draft (Kellen Winslow II - 6th in 2004 & Vernon Davis - 6th in 2006).

All of these tight ends are/were studs but the tight end position in the NFL takes an adjustment period. Here’s how the trio of tight ends did in their rookie seasons:

Now, don’t overcorrect on Pitts and drop him past your fifth tight end. Pitts has an advantage that these other tight ends didn’t. His ability to play receiver and tight end will allow him to maximize his receiving potential. At 6’6 with almost a seven-foot wingspan, 4.4. speed and 10’⅝” hands... with no disrespect to anyone who has come before him, we haven’t seen anyone put together like him.

His skillset also meshes up perfectly with the current trend of the NFL. We’ve seen college receivers and even quarterbacks move to the tight end position and flourish. Darren Waller and Logan Thomas come to mind, but they aren’t the only ones. Pitts is a legit threat at tight end and receiver. He’s no gimmick.

That being said, Hockenson is entering year three and is coming off of a sophomore season that saw him start and play in all 16 games while hauling in 67 receptions for 723 yards and six touchdowns. His catch rate improved from 54% in his rookie season to 66% in 2020.

Despite Matthew Stafford and Jared Goff switching teams and Hockenson receiving the short end of the stick in the trade, he’s in an ideal situation for fantasy purposes as he’s his team’s top receiving threat. The Detroit Lions’ receivers are Tyrell Williams, Breshad Perriman, Quintez Cephus, and Amon Ra-St. Brown. For the most part, they will feed Hock in this offense.

While the Atlanta Falcons are not stacked with receiving talent, they do have Calvin Ridley who is set to be the team’s number one receiving threat with Pitts in the conversation for the second option, while competing for targets with Russell Gage and Hayden Hurst. Atlanta will increase Pitts’ fantasy value by lining him up both as a tight end in 12-personnel with Hurst and as a receiver in 11-personnel. This will bolster his value in year one, but it won’t be enough to surpass Hockenson this season.

Besides the lack of production from rookie tight ends in the NFL, there’s one other main reason that I can’t put Pitts ahead of Hockenson. The Falcons are razor-thin in depth. On paper, this offense is ready to click, but over a 17-game season, injuries will hurt the week-in, week-out production. What happens if Mike Davis goes down? Cordarrelle Patterson, D’Onta Foreman, and Javian Hawkins aren’t going to carry the load without a drastic decline. How about if Ridley goes down, who’s taking double teams away from the rookie Pitts? Gage? Hurst? Speaking of Hurst, if he misses time, Pitts becomes the team’s number one tight end and will have to play inline more as Lee Smith wouldn’t be respected as a receiving threat.

Pitts and Hockenson are two talented tight ends that should have monster years, but in fantasy drafts, it’s about getting max value and dodging landmines. Hockenson is not only the safer pick but the right one as well.