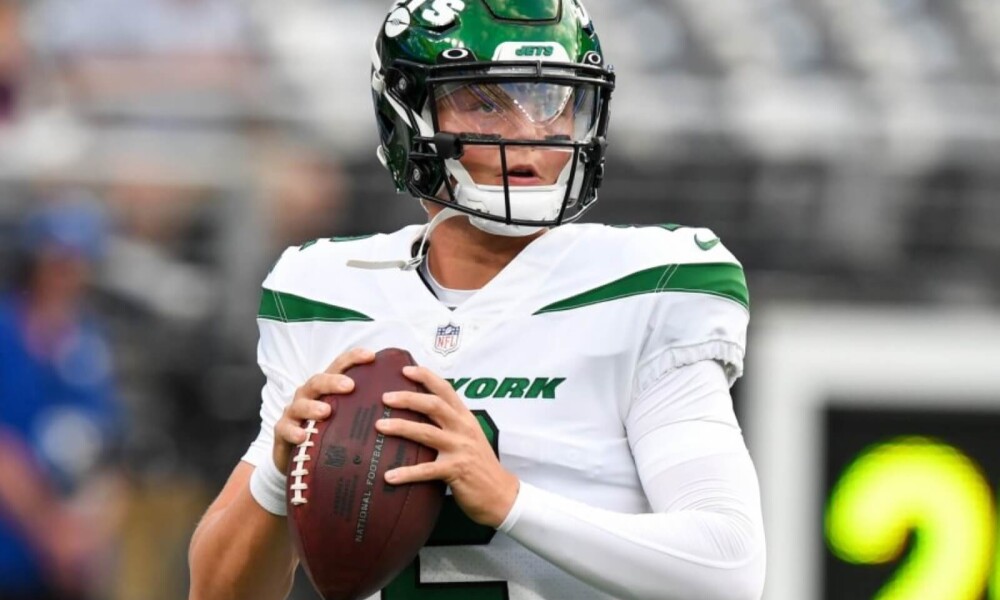 I pride myself on my ability to read the tea leaves and form an educated opinion on subject matters pertaining to the NFL and NBA. After considering many players, I have found four that have a ceiling for historic seasons and one with a surprising floor.

I don’t study college prospects until mid-January at the earliest. Last October, I caught two games of Zach Wilson live on television. The first game had me thinking he was going to be the second pick in the NFL draft, following Trevor Lawrence, who I had predicted to be the first overall pick in the 2021 draft since before his first collegiate start.

I was intrigued but never want to rush my opinion publicly as it’s branded on you forever. I caught another game of Wilson and by this point, I didn’t care that I hadn’t studied him yet, I had already seen enough to know that he would absolutely be the second pick. When draft evaluation time came up, I studied Lawrence first and followed it up with Wilson. I listed Wilson second behind Lawrence, but by this time, I was willing to put my money on Wilson having a better NFL career. I still believe that. So why would I rank Lawrence higher? His projection is astronomical. He may not reach his potential, but if he does, he is going to be a rare breed.

I give you that back story as the main reason why I believe Wilson will flourish this season. I also believe the New York Jets General Manager, Joe Douglas is one of the best in the NFL. I love the talent he’s put around Wilson. That said, the Jets aren’t a contender as of yet, but they will win a Super Bowl in the next three to five years.

In the meantime, Wilson will have to sling the ball all game, every game, to try and keep the Jets in the game. It’s a challenge he’ll relish. That combined with the 17th regular-season game being added this season will help push Wilson to an NFL record for a rookie quarterback.

Andrew Luck passed for 4,374 yards in his rookie season. Ironically enough, Lawrence is considered the cleanest prospect since Luck, but it’s Wilson that will break his record. Justin Herbert put up 4,336 passing yards last year, falling just 39 yards short of setting a new high mark. Wilson could hit 4,500. Wilson will come close to Herbert’s record of 31 passing touchdowns in a rookie season, but he’ll fall a little short, just ahead of Baker Mayfield’s second-best 27 touchdowns and Russell Wilson and Peyton Manning’s 26.

Elliott would become only the 10th player in NFL history to have 20+ rushing touchdowns in a season. Besides Smith, Priest Holmes is the only other running back to have two seasons of 20+ rushing touchdowns, and also like Emmitt before him, he accomplished it in back-to-back seasons as well, first in 2002 with 21, followed by 27 the next season.

Elliott is entering his sixth NFL season. In his prior five, he recorded 300+ carries in three of those seasons while averaging 4.5, 4.7, and 5.1 YPA those years. Each of the 300+ carry seasons saw him record 1,350+ rushing yards. In two of those years, he put up 12 and 15 rushing touchdowns. He’s had 50+ receptions in each of his last three seasons as well.

Now that Dak Prescott is back, Amari Cooper is ready, along with Michael Gallup, and CeeDee Lamb heading into a breakout sophomore campaign. The Cowboys also have two tight ends that defenses have to respect. Almost as big of a difference as getting Prescott back is the return of his offensive line that struggled with injuries last year.

Defenses can’t even think about stacking the box to slow Elliott as they have to respect the three wideouts as well as the tight ends and Dak’s ability to move the chains with his feet. This offense will move the ball and Elliott will see tons of carries inside the five-yard line.

That same season Stafford passed for 5,000 yards, he also put up 41 touchdowns. In 2015 he threw 32 touchdowns (Calvin Johnson’s final season) and that was the only season since 2011 that Stafford has had a 30+ touchdown season.

Stafford got out of Detroit and headed to L.A for 2021. He has talented receivers and tight ends in Cooper Kupp, Robert Woods, Van Jefferson, DeSean Jackson, and Tyler Higbee. The Los Angeles Rams have good running backs in Darrell Henderson and Sony Michel but they aren’t top of the league type guys.

Sean McVay has a new toy in Stafford. He tried pushing Jared Goff. In Goff’s fourth season, McVay gave him a career-high 626 passing attempts. Goff responded with his worst year since his rookie season, throwing 22 touchdowns and 16 interceptions.

Stafford is a gunslinger. He wants to throw it all game. From 2011-2016 Stafford averaged 635 passing attempts per season. He has weapons and a team that can actually pursue a title. He’s played in all 16 games in 9 out of the last 10 seasons (missed eight games in 2019).

Stafford is one of only eight quarterbacks in NFL history to throw for 41+ touchdowns in a season. He did it a decade ago as a kid with the Detroit Lions. The other seven quarterbacks are Peyton Manning (2), Tom Brady, Patrick Mahomes, Dan Marino (2), Aaron Rodgers (2), Drew Brees (2), and Kurt Warner. It’s an impressive and short list.

Stafford will join an even more elite list this season. Peyton Manning (55), Tom Brady (50), and Patrick Mahomes (50) are the only members of the 50+ passing touchdown club...until Stafford joins this year.

In his first two seasons, we have seen Metcalf grow; his targets from 100 to 129, his catch rate went from 58% to 64%, and his touchdowns up to 10 from seven in his rookie year. I expect him to see 150+ targets this season with a catch rate close to 70% while maintaining his 15.6 yards average per reception.

Davante Adams tied Mark Clayton (1984) and Sterling Sharpe (1994) for the third-most receiving touchdowns in a season with 18 last year. He did so on an amazing 77% catch rate and 115 receptions for 1,374 yards. Metcalf won’t get near the 77% catch rate and his receptions will be closer to 100 but at 15.6 yards per reception Metcalf will have a 1,600+ yard season and surpass Adams, Clayton, and Sharpe to join Randy Moss (23) and Jerry Rice (22) as the only members of the 20+ receiving touchdown club.

Metcalf will be the clear number one receiver in Seattle for the Seahawks this season with Tyler Lockett as the talented, veteran number two. D’Wayne Eskridge steps in to improve the slot with Gerald Everett upgrading the tight end position. Gabe Jackson has been added to the offensive line while Russell Wilson is back with five different backs with varying, NFL skillsets.

Metcalf is a nightmare to cover one-on-one and defenses will have to respect all of the receiver and tight positions in coverage while facing fresh, running backs with a minimal falloff in talent from one back to the next. D.K. has played in all 32 NFL games since turning pro with 31 starts.

Metcalf’s quarterback has never missed a game as well, dating back nine NFL seasons and 144 straight starts. The durability, to this point in their careers, will lead them to a special season.

Derrick Henry Wants To Be Ricky Williams This Season

We often hear about 400 touches when talking about the decline of the NFL running back due to being overworked in a season. Derrick Henry had 397 touches in the regular season last year. If we factor in the playoffs, he’s had back-to-back seasons with 390+ touches after recording 391 last season.

The more concerning number last year was 378. Henry had a massive regular-season workload of 378 carries. Since 1990, only 10 running backs have rushed for 378+ times in a season. Every one of those running backs, except for one, had a sharp decline in carries the following season.

Ricky Williams is the only running back in over the last 30 years to have two seasons of 378+ carries. What's more, he did it in back-to-back seasons while actually increasing his carries from 383 in 2002 to 392 in 2003. Williams retired from the NFL and didn’t play in 2004. He came out of retirement and had 168 carries in 2005 before being suspended and not playing in 2006.

Well, if Williams can do it, why can’t Henry? The reason that I lean away from Henry to have the same workload the following season and success is due to how the other eight members all only achieved 378+ carries in one season and never again. Williams being the only one in the last 30+ years and the fact that it was 18 years ago when he did it, is a bit concerning.

Here’s a quick look at the other eight running backs of the last 30 years that have rushed for 378+ carries in a season and how many carries they had the following year:

The drop in carries from their season with 378+ carries to their next season averages out to 245 fewer carries in the following season.

One last note on the 400+ touches that I mentioned earlier. If you prefer to look at it by that standard, the three running backs with the most touches over the last five years seasons were Henry in third with 397 in 2020, Christian McCaffrey in second with 403 in 2019, and Le’Veon Bell at the top with 406 in 2017.

Bell missed all of 2018, looking for a better contract. In 2019 he averaged 3.2 YPC on 245 carries. Last season he had 82 total carries between the New York Jets and Kansas City Chiefs. He just signed onto the Baltimore Ravens practice squad.

McCaffrey followed up his 2019 massive workload by only playing in three games last year. Almost every month he injured a different body part. In September it was a high ankle sprain, November a shoulder injury, and then in December a thigh injury.