Jayson Braddock breaks down some of his favorite DFS value plays for Week 1 action on DraftKings. 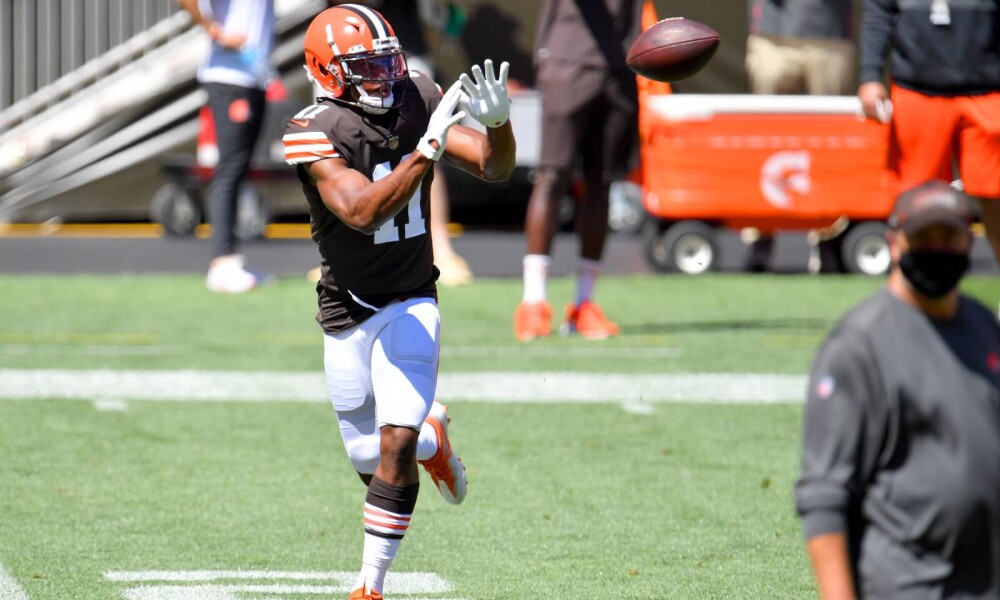 Don’t know who to play in Week 1 to save on salary? Here are some quick-hitter DFS value plays that you can build your lineup around on DraftKings.

$5,900 - Baker Mayfield is only $100 less than Matt Ryan. Ryan has the Philadelphia Eagles so everyone will be on him. Mayfield should have a shootout on his hands with Patrick Mahomes.

$5,600 - Carson Wentz is back. Jimmy Garoppolo at $100 less, looks mighty tempting against a Detroit Lions’ defense that is lacking. Wentz will have to keep up with Russell Wilson and the Seattle Seahawks leading to tons of passing.

$5,000 - Zach Wilson and Sam Darnold are both values here and they are facing each other. At $5,000 you can play either and they will outperform their salary attempting to outduel the other.

$2,500 - Tyler Kroft, Darren Fells, and Jacob Hollister are all minimum salaries on DK at the tight end position. The New York Jets traded away Chris Herndon, making Kroft the top man. He has had 40+ receptions, 400+ receiving yards, and seven touchdowns in a season.

Fells is a chain-moving tight end that blocks first, but he’s found a red-zone role more in recent years, putting up 11 touchdowns over his last two seasons. The Detroit Lions are low on receiving options and will be throwing all day.

Jacob Hollister may have just signed with the Jacksonville Jaguars and I don’t know if he knows one play in the playbook, but the Jaguars are thin at tight end. Trevor Lawrence will get him the ball if he’s active Sunday.

$2,500 - Buffalo Bills defense. I have concerns about several things with the Pittsburgh Steelers and love this Bills defense. They can cover the field and have talent at every single position with a two-deep on the defensive line.

$2,100 - Arizona Cardinals defense is getting no love. They have quality rushers at different levels with two inside linebackers that will own their side of the field. At $2,100, you only need a play or two to go your way and you’re getting free points, almost.

$4,000 - Javonte Williams... What? I had to triple check, but, yep, that’s the salary they have him at. It’s a one-time-only salary. It will not be there again next week. Take advantage.

$4,600 - Chase Edmonds is at a decent cost. I know that James Conner and Kyler Murray will vulture touchdowns from him but he’ll have a bigger role this season. He should leave this game with five to seven receptions, plus whatever he picks up on the ground.

$4,800 - Sony Michel is in a high-power offense. He will see plenty of carries inside of the five and has an opportunity to have a couple of touchdowns this week.

$3,000 - Donovan Peoples-Jones is an extreme value stack with Baker Mayfield. It’s important to monitor the injury status of Odell Beckham Jr. and Rashard Higgins. If they both play, he loses his value.

$3,200 - Quintez Cephus has legit talent but is stuck on an awful football team. He’ll make his points through receptions and if he actually scores, he shatters his value.

$3,300 - Anthony Miller has real NFL talent. Tyrod Taylor will make a lot of underneath throws and Miller has the ability to uncover quickly. He’ll get the value but could surprise with more.

$3,400 - Marquez Callaway draws a tough matchup this week but he’ll be targeted a ton. At this price, I’d play him despite the fact that everyone else will be playing him and the difficulty of the matchup but move up or down in salary, mostly, to one of the other guys listed.

$3,400 - Gabriel Davis plays with a quarterback that may be the MVP this season. He’s is also highly underrated. Josh Allen will go off and Davis will benefit from it, likely catching a touchdown as well.

$3,600 - Jaylen Waddle has the best matchup for the Miami Dolphins receivers this week and Will Fuller is out on suspension. His speed and chemistry with Tua Tagovailoa, alone, will lead to a big play or three.

$3,600 - Marvin Jones is off of the injury report so that should alleviate any concerns as he faces the Houston Texans and will see Terrance Mitchell mostly. Jones will get his shots in.

$3,700 - Parris Campbell is an absolute stud and a threat to house any reception. He just has to stay healthy. He’s healthy right now and one of the top receivers on the Indianapolis Colts.

$3,700 - Jalen Reagor didn’t burst onto the scene in his rookie season but it was a mess in Philadelphia last year. He’ll show his improvement against the Atlanta Falcons in week 1.