Jayson Braddock looks beneath the surface to find the fantasy nuggets you might have missed in Week 1 action. 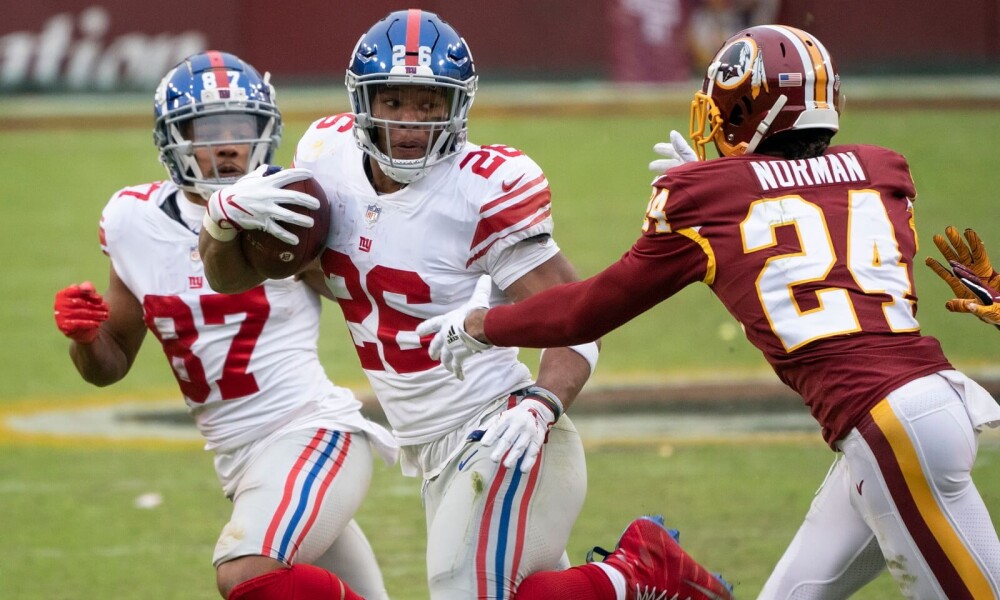 Week 1 is in the books, but before we move on to Week 2 in the NFL, we need to read the tea leaves and understand all of the variables surrounding each performance, so that we can properly assess their value going forward.

Jameis Winston seems more mature and his physique streamlined. His 6 carries for 37 yards went under-the-radar to his five passing touchdowns. It was the seventh most rushing yards in a game for Winston since entering the NFL in 2015. Just like Teddy Bridgewater before him, it appears that Winston has made the most of his time learning behind Drew Brees. He already had the talent, apparent in his last season as a starter in which he threw for over 5,000 yards and 33 touchdowns. The Green Bay Packers looked in preseason form, but I’m still buying with Winston in 2021.

Najee Harris, Saquon Barkley, and Derrick Henry are all running backs that I didn’t draft in any leagues this year. Harris played 100% of the offensive snaps in Week 1 but averaged 2.8 ypc. He’ll see volume all year but struggle to produce due mostly to the offensive line’s lack of chemistry and Ben Roethlisberger needing to get the ball out quick, which will keep defenders closer to the line.

Barkley is still not 100% and has struggled with injuries. In a season in which injuries will be high again, I devalued fantasy players who would be more susceptible to getting banged up. As is the case with Harris, Barkley’s offensive line and the quarterback will not do him any favors in making his job easier this season.

Henry has gone over 400+ touches in back-to-back seasons (including playoffs). The last two running backs to do so were Christian McCaffrey (2019), who was injured the next season, and Le’Veon Bell in 2017, who after sitting out the next season, has never been close to the same back.

Kenneth Gainwell was my third highest-ranked running back prospect in the 2021 NFL Draft. While studying him, I labeled him “the eye of the storm” due to how calm he was in the midst of all of the chaos. He saw 35% of the offensive snaps in Week 1 which was the second most among Philly’s running backs, trailing only Miles Sanders. Boston Scott only got on the field on special teams. Gainwell is the backup and will get consistent work. If Sanders misses time, Gainwell is the guy.

Elijah Mitchell and Trey Sermon are buzzworthy names this week. Mitchell played well after Raheem Mostert left the game with a season-ending injury. Meanwhile, Sermon didn’t play as he was a healthy scratch. San Francisco chose to activate Mitchell and JaMycal Hasty due to their value on special teams. Sermon is the best back in the 49ers backfield. He’s the guy to roster. Don’t overpay for Mitchell. Trade for Sermon.

Devin Singletary and Zack Moss also had polar opposite Week 1’s as Singletary played well in a lead back role while Moss was inactive. Buffalo chose to keep special teamer and running back Taiwan Jones active, while also going with Matt Breida due to his speed. Breida rushed four times for four yards. Moss is only in year two and will get an opportunity to show his worth. Moss deserves the reps over Breida.

Mike Davis and Wayne Gallman played their college ball in South Carolina after growing up in Georgia. Now, they share the same backfield but Davis saw 75% of the offensive snaps while Gallman was inactive. Gallman was recently acquired and most likely given extra time to get up to speed. Davis only averaged 3.3 ypc for the Atlanta Falcons in Week 1 while utilityman, Cordarrelle Patterson provided a change of pace out of the backfield. Gallman averaged 4.6 ypc last year on a bad New York Giants team, can pick up the blitz, and catch out of the backfield. He’s not a special back but he is capable. Davis’ workload Week 1 is encouraging and even though most of the Falcons’ offense struggled, Gallman could start eating into his workload if he doesn’t improve statistically.

James Robinson and Carlos Hyde split the work for the Jacksonville Jaguars. While Robinson saw 67% of the snaps, much was made about Hyde’s extra work. The Jaguars were getting killed when Hyde starting getting most of his work in junk time as to not bang up their lead back. Robinson is unquestionably the guy in Jacksonville.

Bryan Edwards led the Las Vegas Raiders’ receivers in snaps with one more than Henry Ruggs. I had a high second-round grade on Edwards last year before the draft, ranking him higher than Ruggs, who I had a mid-second round on. Edwards is the top receiver for the Las Vegas Raiders, but still second in line for targets behind Darren Waller. His role will only continue to grow as the Raiders limited their receivers snaps this week due to offensive line protection issues. They opted to go with an extra tight end or a fullback or both at times to keep Derek Carr clean vs the Baltimore Ravens.

Credit to Steven Perkins at DrRoto.com, he had been saying in our private discord groups that Sterling Shepard was the top receiver for the New York Giants this year and was expecting heavy work. Shepard was in on 95% of the snaps and is clearly the top target, as long as he stays healthy.

K.J. Osborn has written his name in ink as the third receiver in Minnesota. He played 81% of the plays and saw nine targets.

Cedrick Wilson Jr. takes over for Michael Gallup in a high-power offense as the third guy behind CeeDee Lamb and Amari Cooper.

Quintez Cephus caught a touchdown, despite finishing fifth among Detroit Lions’ receivers in snaps. Tyrell Williams is banged up, leaving Cephus as the best receiver of the bunch. His role will grow in an offense that will be down a lot this season and therefore having to pass consistently.

Donovan Peoples-Jones and Anthony Schwartz both saw the field on over half of the offensive plays with Peoples-Jones seeing 80% of the snaps. They both were clearly ahead of the veteran possession receiver, Rashard Higgins. Schwartz did much more with his reps. Peoples-Jones has legit talent but will lose work to Odell Beckham Jr. when he returns to action. Schwartz will consistently be the tunnel screen and nine route runner as he compares to a Will Fuller type.

Brandon Aiyuk and Trent Sherfield saw about the same reps with Sherfield having one more than Aiyuk’s 26 snaps. Sherfield is a legit talent in an offense that will score a lot this season. Even if Aiyuk’s role grows, Sherfield isn’t going anywhere.

Michael Pittman was on the field for 97% of the offensive plays. I wouldn’t panic with Pittman as it just played out that Zach Pascal would get most of the receiver work this week. Pascal scored two touchdowns while playing 91% of the offensive plays. Carson Wentz will need to start getting all of his receivers consistently involved. Pittman production is coming.

D.J. Chark and Laviska Shenault are the play for the Jacksonville Jaguars this season. Marvin Jones is tough but it’s apparent that he’s already playing through pain. It’ll be surprising to see him make it to the halfway point of the season without missing a game. Jones led the receivers in snaps with 67, followed by Chark’s 62 and Shenault with 52. Chark had only three receptions on his 12 targets, so I reviewed what happened. Chark had one clear drop with one or two other plays that he may have been able to make an adjustment and catch, but for the most part, Trevor Lawrence was off. He threw dirtballs, didn’t read the zone, and looked like a rookie. Lawrence will get better and Chark will be his main big-play target with Shenault taking tons of work underneath.

Jared Cook has 22 TDs over the last three seasons. He’s far ahead of the other tight ends on the roster, talent-wise. Bob Lung at DrRoto.com and I were both high on Cook this season for that reason and the fact that Justin Herbert is a legit franchise quarterback that can sling it. He’s lacking legitimate depth at the skill positions around him. The top trio of Keenan Allen, Mike Williams, and Cook will see the majority of the work, especially in the red zone.

Cole Kmet was another tight end going way too late in drafts. He saw 74% of the offensive plays and when Justin Fields takes over, his production will skyrocket.

Juwan Johnson was drawing rave reviews from those close to the New Orleans Saints this offseason. He caught all three targets for two touchdowns in Week 1, despite only playing 12 plays to Adam Trautman’s 51. Trautman had three receptions on six targets for 18 yards. His production will increase. Johnson will eat into his work and with his physical tools and Winston looking locked in, he could be a real value.

Dalton Schultz and Blake Jarwin both will get targets this season. In their first game, Schultz played 68% of the plays while Jarwin played 57%. Jarwin will be more of a chain mover and catch some touchdowns on plays drawn up inside of the five-yard line, but Schultz has more value as a guy that can do more after the catch.

David Njoku had a great camp in which reporters said that it had finally clicked for him. After watching one week of him, I tend to agree. Austin Hooper saw three more plays than Njoku in their first game. They both will be involved all season, but I believe Njoku will outproduce Hooper in 2021.

James O’Shaughnessy saw 80% of the snaps in Week 1 and eight targets. Lawrence will depend on the running backs, slot receivers, and tight end heavily this season. I thought originally that Jacob Hollister would eat into this role, now, I don’t think he factors in as much.

Tyler Conklin looks like the guy at tight end, even after the trade for Chris Herndon. Despite Herndon only being acquired recently and not being able to have his best showing, I still believe Conklin holds him off this year. The Minnesota Vikings trusted Conklin late in the game, down the field. He was on the field 71% of the play and as Herndon gets up to speed, I don’t believe that percentage drops, much if at all.

Jack Doyle keeps holding others off. Wentz's love for the running backs and tight ends gives Doyle value. Doyle played on almost 60% of the offensive plays and looks to still be the top guy in an offense that will depend on the tight end.