Ted takes a look at the best Sleeper Over/Under plays for the NFL Divisional Round. 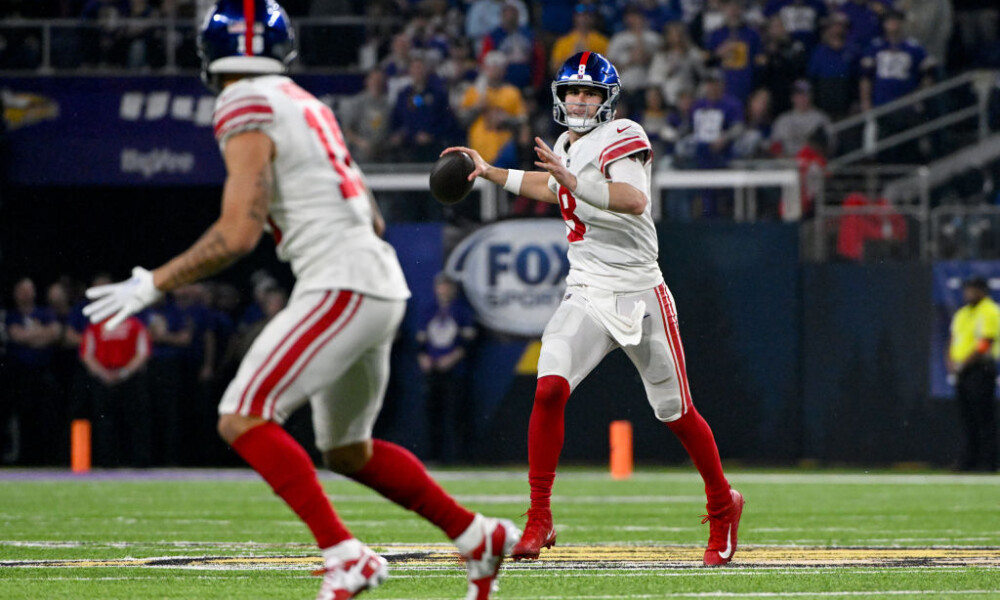 We finally hit the perfect five for five last week, so I hope you followed along and made some money with me! We’ve got just four games this weekend, so fewer lines to pick from, but I think we can keep that hot streak rolling. Let’s get right into it!

Yes, Danny Dimes just lit up the Minnesota secondary, has huge rushing upside and finished as a top 10 QB this season. But even in this breakout season, he had over 21 fantasy points just five times in 16 regular season games. Those five games came against the Colts, Vikings, Lions, Jaguars and Bears, all teams among the top 10 in fantasy points allowed to the QB position. The Eagles, on the other hand, were the sixth-toughest fantasy matchup for quarterbacks this season. In his Week 14 game against Philly (he sat their meaningless Week 18 matchup), Jones rushed for a TD and still came up short with just 19.36 fantasy points. While he does have the rushing ability to make us regret this, I think more often than not, Jones and his scrappy-but-not-that-good receiving weapons come up short against a very talented secondary.

In his first season in Philadelphia, Brown finished fourth among qualified WRs with a whopping 3.39 yards per route run against man coverage, which the Giants play at the second-highest rate in the league. While he did post just 70 yards against them in their only real matchup in Week 14, that is the only week of the last six in which he didn’t hit at least 90 yards. In his first playoff game as an Eagle, look for Brown to continue to establish himself as one of the top receivers in the league.

While MVS had at least three receptions in nine out of the Chiefs’ 17 games, that number is deceiving as to his current role in the KC offense. Five of those nine games came in the Chiefs’ first seven games (before their bye), in which he averaged a 73.9% snap share and 5.4 targets a game. After the bye, the former Packer missed this mark in six of 10 outings, while playing just 62.9% of snaps and seeing 4.3 targets a game. With a line this low, that change in volume and opportunities can make all the difference.

I absolutely hate to pick against the NFL’s best QB … but 27.4 fantasy points is just too high to pass up. I’m looking at it this way. If Mahomes hits his current lines on Sleeper of 2.5 passing TDs, 314.5 passing yards, 23.5 rushing yards and 0.5 INT, that would be just 24.37 points, over three full points short. I’m going to click the under on this, be terrified until Saturday, but hopefully survive with just a “great” but not “insane” performance from Mahomes. For a bonus, this likely has some tiny positive correlation with our MVS under, but is still available to be put in the same pick.

Remember those three weeks this season when Samaje Perine was an RB1 and going to take Joe Mixon’s job? While that never happened, and it might not be pretty, but I think Perine sees the field just enough to hit this mark in what should be an absolute shootout between the Bills and Bengals. Since Joe Mixon returned from injury in Week 14, Perine has averaged a solid 44% snap share, including over 50% last week against Baltimore. It is definitely worth noting that he has posted a putrid 18.3 yards per game in that time, but he has been seeing at least a handful of touches in every game, and the Bills’ defense isn’t unassailable on the ground. When all it takes is one nice screen or big run to make this a certainty, I’ll roll the dice with Perine this week.