All the information you need for your fantasy baseball drafts in one place. Get access to all of our pre-draft content, from podcasts to positional rankings to team breakdowns. 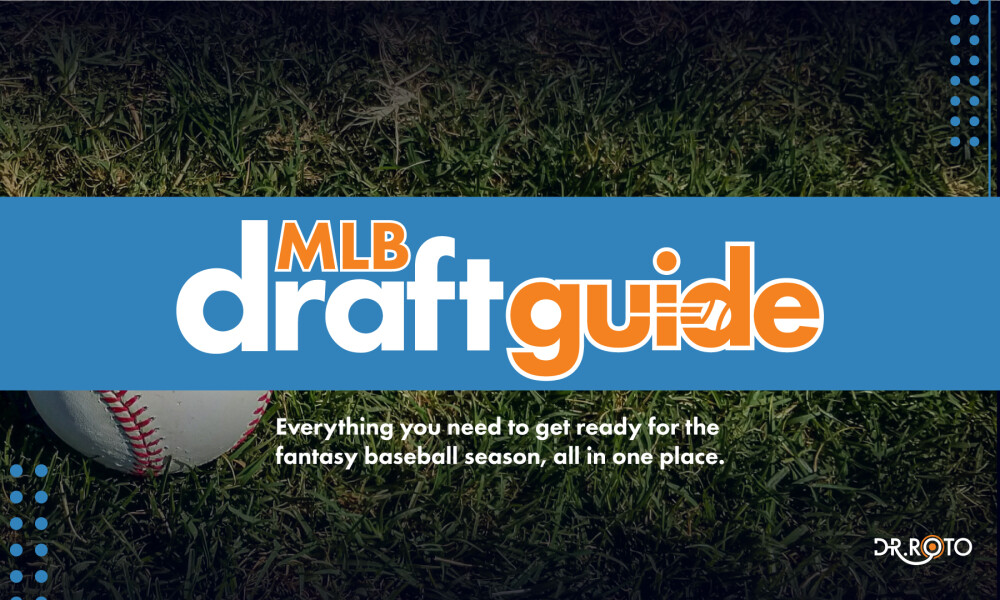 Welcome to the DrRoto.com 2022 Fantasy Baseball Draft Guide! On this page you’ll find the content to prepare for your fantasy baseball draft, no matter if you are playing in a home league or in a high-stakes contest. Moreover, our advice doesn't just begin and end with this draft guide. Our team is committed to giving you the in-season advice that will help you separate from your competition. Just ask your questions in our subscribers Discord chat and one of our experts will get back to you. Fantasy Baseball can be a grind, but when you have a team around you who has YOUR SUCCESS in mind, winning is just around the corner!

Here are all the rankings, articles and podcasts for our 2022 Draft Guide. This page will be constantly updating as we produce more content, so keep checking back as draft day approaches!

Dr. Roto: Doc first began playing fantasy baseball back in 1992 when he participated in an ultra-competitive high stakes auction league. Ever since, he has been deeply involved in the game, helping his followers win seasonal fantasy championships and DFS contests. Doc is a member of LABR and Tout Wars and can be found competing in numerous NFBC contests throughout the season. Make sure to listen to Doc on SiriusXM Fantasy Sports radio as he gives out his Visionary Plays to help people become his newest rich friends!

Lou Landers: Lou has been playing fantasy baseball since 1999 when he was 10 years old. He grew up spending hours playing MLB video games, making trades, signing free agents and creating super teams. That love and passion is what drew him to working in the fantasy baseball industry. He has been writing and podcasting for multiple sites for the past eight years, plays in industry leagues such as Roto Masters, TGFBI (from the very beginning), and a host league on NFBC hosted by Pitcher List. He also has two weekly sports talk shows on Sports ByLine and the Armed Forces Network. He is a member of the FSWA.

Lucas Biery: Lucas has been playing fantasy baseball since 2007 when he was 13 years old. He first fell in love with baseball with the iconic 2004 Boston Red Sox team that shocked the universe and broke the curse, while also pretending he was Chipper Jones during Little League and playing copious amounts of MVP Baseball 04 & 05. That love for the game was his foundation to later play fantasy baseball, by far the greatest and most fair fantasy game out there! He has been writing and podcasting for multiple sites over the past 5 years, including Dr.Roto.com and Fantasy Sports Degens. He also plays in industry leagues such as GLARF, RotoMasters dynasty leagues, Real Fake dynasty league and TGFBI (year 4). Lucas plays mainly DraftKings tournaments, as he took down a GPP tournament in 2021 by stacking Diamondbacks against a chalky Patrick Corbin who inevitably got lit up like a Christmas Tree!

Kyle Amore: Kyle has been passionate about fantasy sports since elementary school. It started in the mid-90s, tallying Sunday NFL box scores in the Monday morning newspaper. That evolved into season-long NFL, MLB, NBA, NHL and European soccer fantasy leagues in current formats, as well as DFS. His love for sports started at an early age, and led to a collegiate and semi-pro (Italy) career in baseball. Besides playing, his love for dissecting rosters started when he got his hands on Major League Baseball featuring Ken Griffey Jr. on the Nintendo 64. Since his playing days, he’s dedicated the past seven years to writing numerous fantasy baseball articles, joining podcasts and dissecting team perspectives by bringing first-hand knowledge to hitting/pitching mechanics. Minor league prospects have been a focal point in not only his articles, but his research. A graduate of Tommy John University, he’s been known to talk rehab, as well as long-term outcome, in an area he specializes in.

Cam Giangrande: Cam is a dinosaur. He’s been passionate about baseball since 1978, marveling at Jim Rice’s MVP season. He was fortunate to grow up during the infancy of rotisserie baseball, literally playing since the mid-80s. His other passion is writing, and when the opportunity to write for RotoExperts presented itself, he jumped in with both feet. He’s also written for Sportsgrid, and now with DrRoto.com. He’s a member of the FSWA and has created two baseball statistics, one offensive and one pitching. The offensive stat is called Plate Appearance Percentage and the pitching stat is called WHERK, which identifies better pitchers based on a combination of walks, hits and strikeout ratio. Both stats have helped him win multiple titles through the years.

John Carando: John has loved the strategy involved in all kinds of games for as long as he can remember, and fantasy sports are no exception. While he used to play little league baseball, his most memorable moment was probably on the mound one day when he got hit in the eye by a comebacker. What really drew him further into the baseball universe was the love he developed for the game through playing fantasy. John's been playing fantasy baseball for about a decade now and doesn't ever plan on stopping. He is currently in two of the three RotoMasters leagues and hopes to compete in more industry leagues in the future. John enjoys trying to analyze all different facets of the game but especially loves pitching analysis. Having lived near Springfield Massachusetts all his life, his favorite team is the Boston Red Sox.