Gabe has a player from each NFC East team that you should stay away from in your fantasy football drafts. 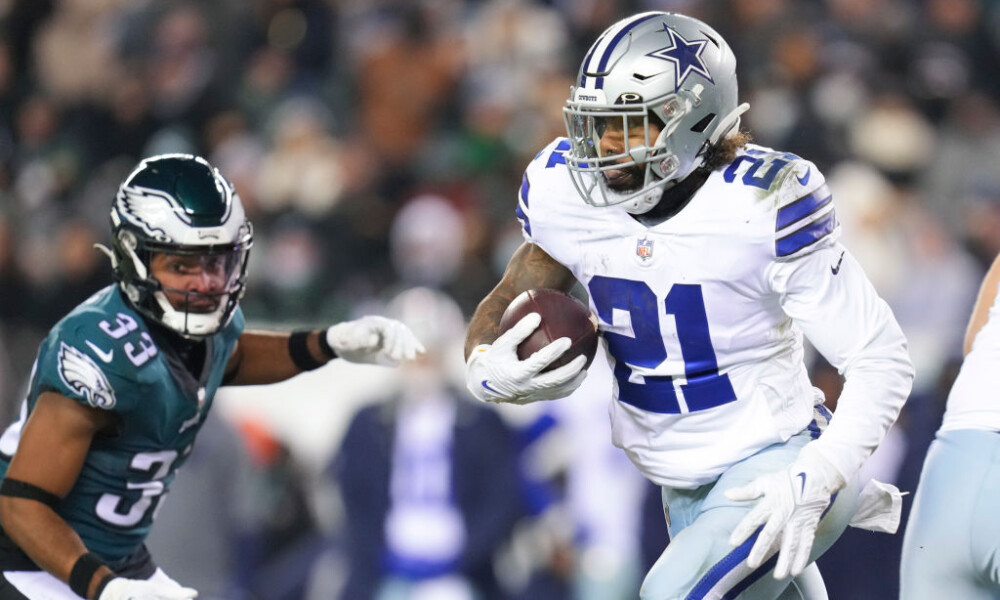 Each team in the NFC East (and the NFL for that matter) has that one player who everyone thinks could break out as a Pro-Bowler or even an MVP. And while NFC East fans might refuse to admit their favorite player isn’t as good as they think (looking at you Cowboys fans), the division isn’t immune to having its busts. So let’s dig in and find the most overvalued player on each team in the always exciting NFC East.

If there’s one phrase to describe Ezekiel Elliott’s post-rookie-year production it would be decline. While it might be tough for the Dallas faithful to admit it, Ezekiel Elliott has regressed each year he’s been in the league. That’s not just conjecture though—Elliott has never seen his yards per game increase from the previous year, a dangerous notion for fantasy owners thinking about drafting the 3x Pro-Bowler.

Ezekiel Elliott did have a top 10 season in standard and PPR scoring last year, but that’s more of a testament to the runningback’s durability than his explosiveness. If Elliott plays all 17 games once again, his floor is an RB2, but his injury history along with the emergence of Tony Pollard makes Elliott’s ceiling identical to his actual 2021 season.

It’s hard to pick a bust for the Giants because they have so few players projected to be stars, but if any player fits the mold, it’s Sterling Shepard. Shepard has meandered about the waiver wire’s top tier for years now, but now it might be time to finally let go of the seven-year veteran. A fully healthy Kadarius Toney along with rookie WR Wan’Dale Robinson will steal snaps from Shepard–not to mention WR1 Kenny Golladay and his inevitable progression.

If we’re being honest, the only reason Shepard might be looked at in the first place is name recognition. Barring a serious advance from the stagnant Giants’ offense, Shepard shouldn’t be relevant. Don’t use this blurb as advice to take Shepard later than projected, use it to cross Shepard off any 2022 cheatsheet you encounter.

Every year it feels like Miles Sanders has shown flashes of greatness only to miss a few games because of injury. And while the Eagles’ lead back should still produce at a high level in 2022, injuries shouldn’t be the only concern for potential Sanders drafters. While QB Jalen Hurts provides his offense with plenty of red-zone chances, he is often the one to vulture touchdowns from Sanders on designed QB runs. Although backups Kenneth Gainwell and Boston Scott shouldn't be as big of a concern to Sanders, they are used more often than typical backups (664 combined rushing yards in 2021).

Sanders should still be drafted relatively early in PPR leagues, but fantasy owners should be cautious of his red flags. His injury record along with the Eagles’ history of load management should place Sanders right around the seventh round in a 12-team league.

First, let’s start by noting that Terry McLaurin’s place on this list is not due to any projected regression in skill or highlight plays. No, the Commanders’ WR1 finds himself in a “busts” article solely due to his quarterback, Carson Wentz. Sure McLaurin has succeeded with subpar QBs in the past, but Wentz is a different monster. In his final two seasons with the Eagles, Wentz was fortunate enough to have decent coaching and a great offensive line, but alas, none of his receivers finished in the top 55(!!!) in PPR fantasy pts. It was only until he was put behind one of the best O-lines in the league and had an All-Pro RB complement in Jonathan Taylor, that he was able to produce a top-20 WR (Michael Pittman Jr.).

McLaurin could still put up WR1 numbers, and if the Commanders’ offense somehow clicks, he could take his production to a different level. But…that seems more like fantasy than reality. Until Wentz proves he can revert back to his 2017 form, McLaurin should be looked at very cautiously.