Cam breaks down why Aaron Boone may be choosing to reinsert Chapman as the Yankees' closer despite Clay Holmes performing much better in the role ... and the fantasy implications of the move. 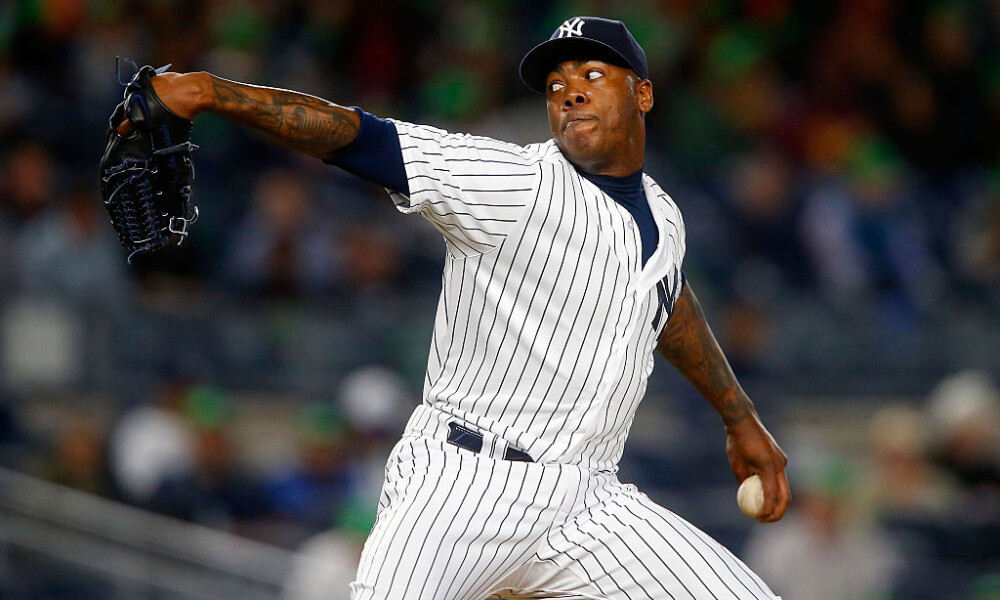 Yankees manager Aaron Boone has indicated that when Aroldis Chapman returns from the IL from his Achilles injury, he’ll return to his role as closer despite Clay Holmes pitching lights out all season. In Chapman’s absence, Holmes has been nearly perfect.

He just picked up his 11th save and for the season is sporting a ridiculous 0.29 ERA and 0.68 WHIP. In 30.2 innings he’s struck out 32 batters … he’s been filthy. Frankly, even before Chapman went down, Holmes was the best pitcher coming out of the Yankees bullpen, in any inning. And although the Yankees have been the best team in baseball all year, their extreme rise has coincided with Chapman’s injury. In the team’s last 16 games they are 14-2.

So the question is, why would Boone make the switch? Perhaps it simply doesn't matter. In this new age of baseball, a team’s most dominant and vital reliever isn’t necessarily relegated to ninth-inning duties. If the team needs a rally to be stopped in the seventh, it’s not uncommon to see that pitcher come into the game. It’s called high leverage situations. Chapman may be best suited and wired to just pitch in save situations at the end of a game, and not deployed in this other 21st-century role. Holmes on the other hand has already proven he can thrive in any situation.

This will hurt Holmes' value, by losing save chances, but it could help his value in leagues that count holds.

I can also offer another possible reason to plop Chapman back into the closer’s role … to showcase him. Show the rest of the league that he’s back healthy, and move him before the trade deadline. This is not your father’s Chapman. For the season before he went down, he made 17 appearances and did manage nine saves. However he also had two losses, to go along with an awful 3.86 ERA and 1.64 WHIP.

He’s in the last year of his 16-million-dollar contract, and he surely won’t re-sign with the Yanks. There is an adage that a team can never have too much pitching, but I would maintain that another adage is more apt here … addition by subtraction. At this point, Holmes is the better, more reliable option to close out games, and the team does have ample relievers to fill those other slots. Bringing back Chapman will make them weaker in two spots.

So then the question is, where is a good landing spot for the big lefty? How about the San Fransisco Giants? They currently have four relievers who have gotten a save, but no clear-cut closer. Camilo Doval leads the team with nine saves, and Jake McGee has three. The Giants are clearly in a win-now mode, and they have the budget to pick up Chapman’s remaining $8-10 million for the rest of the season. He would be the perfect rental for a team looking for that one piece to put them over the top. The Giants are sitting with a 35-27 record and are 3.5 games behind the Dodgers for the NL West title and would find themselves in the Wild Card Game if the season ended today. Chapman would give them added depth at the back end of games and could be that missing piece that propels the Giants into the World Series … maybe against the Yankees