After a wild Week 3, Cam Giangrande breaks down where all 32 NFL teams rank according to Las Vegas. 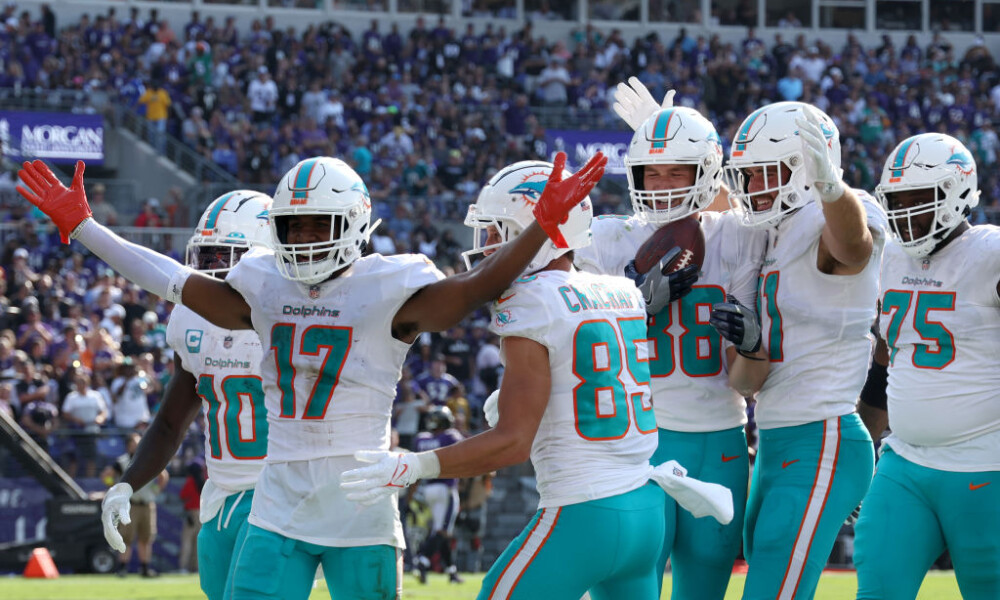 This week produced more upsets and surprises, and a handful of major swings up and down the Power Rankings:

Check out the DrRoto.com weekly fantasy football rankings for Standard, Half-PPR and full PPR leagues! These comprehensive best-in-the-business rankings will help you DOMINATE your league!

Reminder: Teams are ranked by their odds to win the Super Bowl according to Las Vegas, with their previous week's ranking in parentheses.

A tough loss in a dogfight of a game in Miami has people taking notice of the Dolphins if they hadn’t already against the Ravens. But it’s still not enough to knock the Bills from their perch, thanks primarily to both Kansas City and Tampa Bay losing as well.

Coming off of back-to-back wins after their opening night loss to the Bills, the Rams have clawed back to the No. 2 spot.

The Eagles are one of the remaining two undefeated teams left in the league. They made a huge leap, up five spots to No. 3. They look like a serious Super Bowl contender in a weak NFC conference.

The Packers have moved up two spots, hanging on against the Buccaneers in Tampa Bay. And they should at least hold steady this week against a depleted Patriots team.

The Colts definitely needed the game more than the Chiefs, but it was still an inexplicable loss … and Patrick Mahomes made his feelings known heading into the locker room at halftime, arguing with offensive coordinator Eric Bieniemy for not trying to score.

Like the Chiefs, the Bucs slide down three spots and will look to rebound, facing those same Chiefs this Sunday. At this point, the location of the game is in doubt due to a hurricane heading straight for Tampa Bay.

The Dolphins have moved up 12 spots in two weeks. Some would argue they should be even higher, and even higher than the Bills by beating them head to head. It was an extremely tight game and it was at home. If they can come out of Cincinnati with a win on Thursday Night, they will surely at least crack the top five, maybe even the top two.

The Ravens bounced back nicely after their meltdown against the Dolphins in Week 2. Still, they only beat the Patriots, which doesn’t seem like that big an accomplishment this year.

After Dak Prescott's injury, there was nothing but doom and gloom in Dallas. Enter Cooper Rush. All he’s done is win back-to-back games against Cincinnati and the Giants, and the Cowboys are back in the top 10, and smack dab in the middle of the NFC playoff picture.

It’s tough to see a 1-2 team in the top 10, but much of this is based on last year’s pedigree. A win on Thursday against the Dolphins will prove they belong and move them up even more. A loss will put them at 1-3 and most likely plummet them down the board.

The Chargers are experiencing that plummet, moving down six spots from Week 2. Not only did they lose to the Jaguars at home, but they lost badly. They need to rebound this week.

This is the second week in a row that the Broncos have won and moved down the list. Nobody is buying that this team has Super Bowl mettle. Before that happens, Russell Wilson will need a signature game, and the team will have to get through an entire game at home without being booed.

A mediocre win against a mediocre opponent has moved the Vikings up one spot, on their way to London to face another mediocre Saints team.

The Browns are very close to being 3-0, and Jacoby Brissett has them playing very well. I’m not sure they have enough to outlast the Ravens for the division, but if they keep playing like this they will stay in the playoff hunt.

This is a huge eight spot drop. But in seeing another lackluster loss, maybe the No. 7 rank was more the aberration and this rank of 15 is more accurate for what this team is.

It feels like all of these middling teams can have a net thrown over them. It was an impressive win against the Chiefs in what felt like a must-win game. The Colts moved up one spot into the top half of teams.

In what could have been a signature win to take the Giants to 3-0 and realistically a top 10 spot, they lost to the Cowboys without Dak Prescott … at home. There was a reason they were only No.16 at 2-0.

In a battle of the winless against the Raiders, the Titans prevailed. It moved them into the top 20. It will be interesting to see where last season’s AFC No.1 seed goes from here.

The Saints have now lost back-to-back games and will have a tough game against the Vikings in London on Sunday.

The Jaguars vault up the list this week from no.29. They find themselves 2-1 and in first place, and second-year QB Trevor Lawrence is proving why he was taken with the top pick in the draft.

A bad loss on Sunday against the Packers with backup QB Brian Hoyer will slide the Pats to 1-3 on the year and further move them down this list.

The Lions are one of the most exciting teams in the league, with one of the highest-scoring offenses. Although they are sitting at 1-2, there’s definitely a buzz around this team. The loss on Sunday didn’t lose them any ground.

The Raiders are sitting at 0-3. It is fortunate there are some other really bad teams in the league or they’d be even lower. It is starting to look like a very long season for first-year HC Josh McDaniels.

A lackluster performance against what looks to be one of the best teams in the NFC moved the Commanders down one spot.

You get the feeling that HC Mike Tomlin will figure things out, after all he’s never had a losing season. But even if he holds that streak, it won't be much more than a 9-8 season. This team just doesn’t have the horses.

One of the problems with teams this far down the list is that it will take a string of wins to move them significantly higher and get the public believing in them.

Like the Bears, the Panthers won, but it only moved them up one spot.

Two wins in a row wasn’t in the cards for the Jets, and it drops them two spots this week.

These bottom teams will jockey around here for the season. This week, the Falcons win over the Seahawks and move up two spots.

The Seahawks loss on Sunday drops them down one spot, below the Falcons they lost to.

And this week the distinction of No. 32, (like Mr. Irrelevant in the NFL draft), goes to the Texans.