Mike breaks down the fantasy outlooks for this season and beyond for the top WRs drafted into the AFC this year. 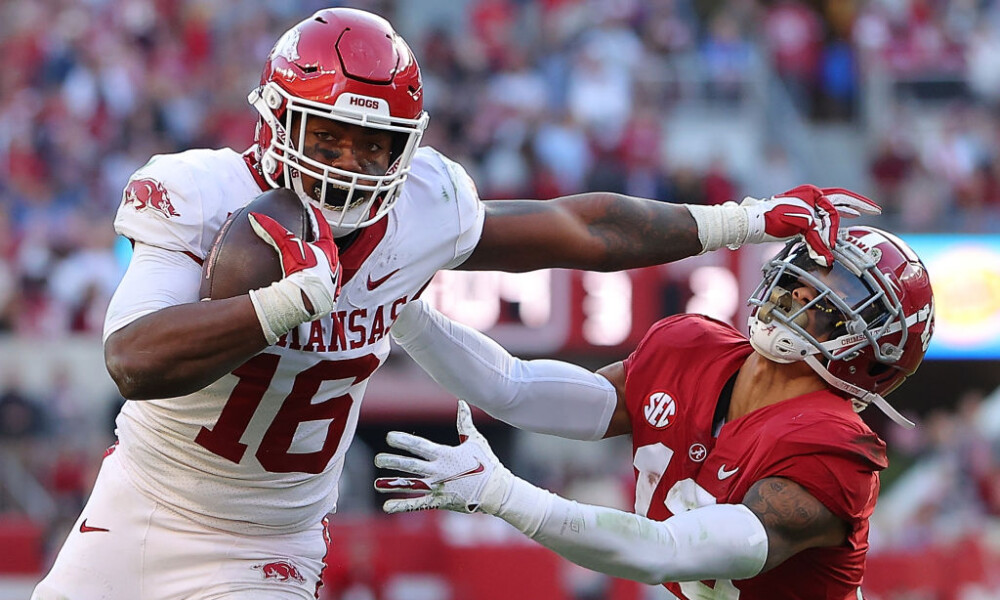 Burks was the sixth and last wideout taken in the first round of the NFL Draft but has arguably the highest ceiling for the 2022 season. He played in a heavy run-based Arkansas attack but still managed 66 catches for 1,104 yards and 11 touchdowns with suspect quarterback play. The Titans surprised everyone on Draft Night by trading Pro-Bowl receiver A.J. Brown with the hopes that Burks can become the same type of player. He's worth a late round flier in Redraft leagues with oft-injured Robert Woods as the only established receiver on the roster. Burks will also most likely be the first or second receiver taken in Dynasty and Rookie Drafts thanks to his combination of 2022 opportunity and career-long upside.

Wilson was the second receiver taken in the NFL Draft after racking up 70 catches for 1,057 yards and 12 touchdowns in his final season with the Buckeyes. Talent-wise there isn't much standing in the way of Wilson starting in three wide sets right away for the Jets. He isn't the tallest receiver but showed elite athleticism at the Combine with a 4.37 40-yard time and a 36" vertical. His year one outlook is clouded by Corey Davis and an emerging Elijah Moore headlining the receiver room. Wilson is worth just a late-round pick in season-ling leagues but will be of course be very popular for Dynasty and Rookie leagues.

Moore was a monster in the MAC last year with 95 catches for 1,292 yards and 10 touchdowns, and he will now head to a high-powered Chiefs offense that just traded six-time Pro Bowl receiver Tyreek Hill. His athletic profile resembles that of Garrett Wilson, but, as with any mid-major star, some may take a wait-and-see approach to see how Moore deals with a major step up in talent. On the other hand, outside of Travis Kelce at tight end, the passing game in Kansas City will likely be through committee and Moore will have a solid opportunity to seize some of what is expected to once again be one of the top offenses in the league. JuJu Smith-Schuster, Mecole Hardman and Marquez Valdes-Scantling are all veteran options that they can go to, but there is very high chance that Pro Bowl Quarterback Patrick Mahomes will make one if not two receivers above-average fantasy options, and Moore could be one of them.

Metchie will enter the league as arguably the most ready-made receiver having come from an Alabama system that has produced top talent at this position. Metchie was highly productive in his final two years with the Crimson Tide, having finished last year with 96 catches for 1,142 yards and eight touchdowns. His path to targets at the receiver position will be tough next year with stud receiver Brandin Cooks, a really nice second-year player in Nico Collins, and veterans Phillip Dorsett and Chris Conley on the roster. He's going to be someone to watch during the year and carries significant upside in Dynasty and Rookie Drafts.

Pickens comes into the NFL as a boom-or-bust prospect in both real life and for fantasy purposes, but the Steelers were willing to roll the dice. With injuries taking almost all of his 2021 season at Georgia, Pickens did flash his immense upside in the National Championship game with a 52-yard grab. Early production will be tough with a projected rookie quarterback in Kenny Pickett and established playmakers in Diontae Johnson, Chase Claypool, Pat Freiermuth and Najee Harris. He is worth a watch in Redraft, but his biggest appeal will come in Dynasty and Rookie Drafts.

Tier 3: On the Radar Redraft/Late Round Dynasty and Rookie Draft

Thornton, Pierce and Bell will most likely need injury and/or other things to fall their way in order to become relevant in Redraft settings this year. All three oft heir teams have very strong rushing attacks they will lean on during the year. David Bell has the best situation for 2022 with a Pro-Bowl caliber quarterback in Deshaun Watson and Amari Cooper drawing plenty of attention in the passing game. All three have appeal in the future and should be selected in Rookie Drafts and are worth a late look in Dynasty formats.