Mike takes a quick look at the two most important situations fantasy players should keep an eye on from the NFC North. 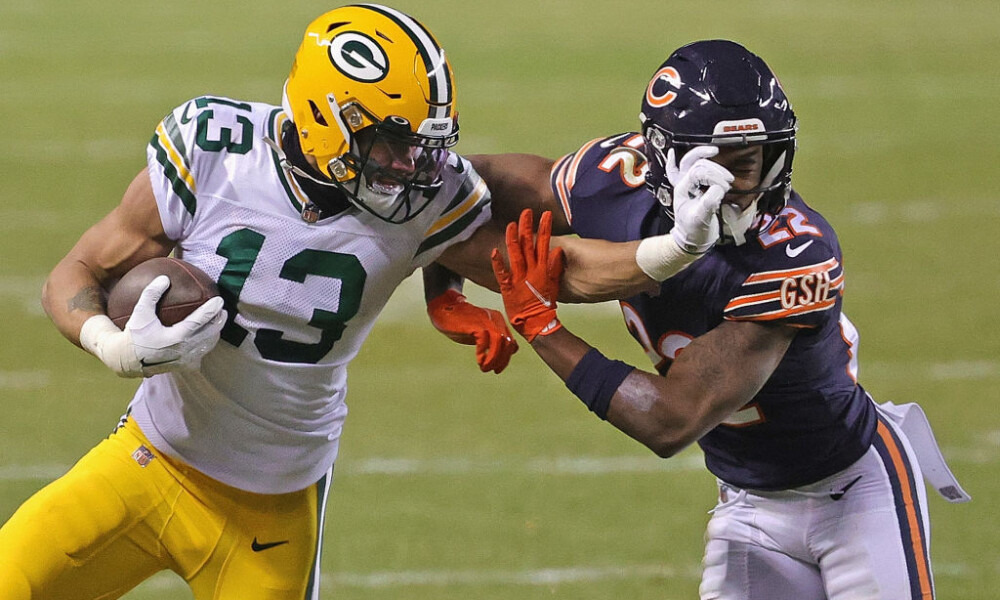 Who Will be the Green Bay Packers WR1?

One of the biggest question marks in fantasy circles is what to do with the Packers receivers who have a huge opportunity with Davante Adams gone and Aaron Rodgers returning. Rodgers threw for 4,115 yards and 37 touchdowns last year. If he hits close to these numbers again, the WR1 in Green Bay could be in line for a nice year. No one in this group will touch the 123 catches, 1,553 yards and 11 touchdowns that Adams posted last year but something like 70/1100/8 is certainly not out of the question for someone on this roster. Yes, the masses will say that the backs and tight ends will receive more volume but if the Packers are going to challenge for wins, the former will most likely need to happen.

This group's current ADP could present massive value in fantasy circles and is worth a dart or two. The odds-on favorite is Allen Lazard who showed promise in 2021 and seemed to build trust with Rodgers toward the end of the year. He scored five of his eight touchdowns after Week 13 and should see an increase in opportunity. He will have to contend with second-round draft pick Christian Watson, who is garnering a lot of hype with his size/speed combination. His highlights are filled with big plays but will be making a considerable jump in competition after playing his college ball at South Dakota State. He's clearly the most gifted receiver on the roster and it wouldn't be a surprise if he burst onto the scene. A veteran rounds out this group with Rodgers' longtime teammate Randall Cobb. Cobb has caught 462 balls for 5,526 yards and 48 touchdowns from Rodgers in 107 career games together. It's no secret that Rodgers trust Cobb but how long can Cobb continue to be productive on the backside of his career? Fantasy managers should keep a close eye on reports coming out of Green Bay to see who among these three is looking like the WR1 for the Packers.

Who Will be the Chicago Bears WR2?

The Bears come into the 2022 season with a rising star in the receiver room in third-year player Darnell Mooney. What they have behind Mooney leaves a lot to be desired and will ultimately determine their fate in both fantasy and real-life. We will need to watch how a trio of wide-outs fair in camp and during preseason games to see who will step up as the number two. First crack will go to the newly acquired former Chief, Byron Pringle, in the hopes that a larger role will unlock hidden potential. He impressed toward the end of the year with 12 catches in the playoffs for 82 yards and three scores. He will need to show more of that to stay ahead of Equanimeous St. Brown and third-round draft pick Velus Jones Jr. St. Brown is an interesting option after coming over from the rival Green Bay Packers. He's a 6'5" slot receiver and brings versatility to this offense that is in desperate need of something different. Like Pringle, St. Brown comes in on a one-year deal and will need to make something happen if he wants to stick around in the league. Velus Jones has been said to be making an impression early in his career. He might not be the optimal age for most rookies, but his 4.3 speed and ability to make things happen after the catch could make an immediate impact across from Mooney. He looks to have the most upside as a rookie, but how quickly he can learn the offense and adapt to the NFL game will tell the story in year one. Again, it will be important to see who secures the role across from Mooney, as that player will immediately become one of the cheapest NFL WR2s available on fantasy draft day.