Samantha Holt digests all of Week 6 NFL football and hooks you up with her Week 7 fantasy football stock watch! 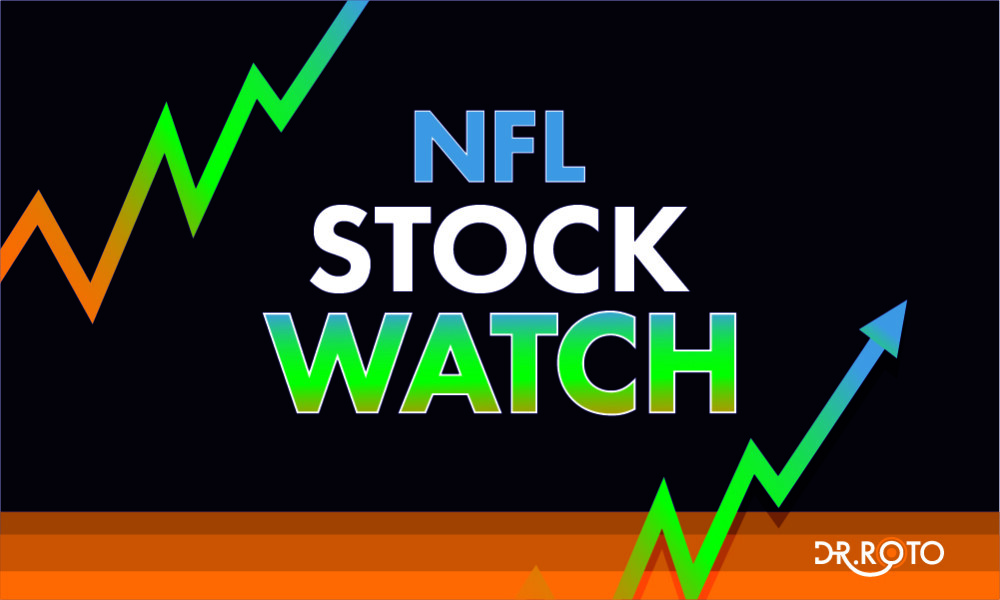 Week 6 certainly didn't hold back the drama. Along with the first round of teams on a bye, there were six blowout matches, five of which were decided by a 20-point deficit or more! Personally, I will have to get over the number of Chargers players I started in DFS this weekend. However, I will have to get over it quickly. Not only do we have many more injuries to contend with but we also have six teams on a bye in Week 7, including the Chargers, Steelers, Bills, Cowboys, Vikings, and Jaguars. This hurts already. Now, let’s look at the players we can get excited about and the ones we should be wary of as we press forward.

Stock Up, but for streaming purposes. With so many teams out I want to give you upside for a streamer in this one. The Dolphins' defense has been so brutal, it’s forcing them to quicken their pace on offense and air out the ball to catch up. No time to run either or even have consistency in the backfield. Tua looked healthy this week and had 329 passing yards, two touchdowns, and even 22 rushing yards. Against the Falcons this week, it’s too favorable a match-up to miss.

After suffering a concussion in Week 5, we were all wondering if Jones would get the green light to start in Week 6. Somehow he did, and Jones had 3 interceptions, a fumble, and 0 touchdowns... Ouch. I wonder if they should have rested him this weekend instead? For me, this feels like the beginning of a steady downward spiral for Daniel Jones. His receiving core adds another injury to their roster with Kadarius Toney making an early exit in this matchup. He did get Sterling Shepard back, but with the constant rotation, I feel that Jones is going to be facing an uphill battle to find some consistency.

Despite the win, Tannehill wasn’t the star on Monday Night Football, but then again, will anyone ever outshine Derrick Henry? Probably not. Better days ahead for Tannehill. A.J. Brown is back to his full self and the Titans take on the Chiefs, who are beatable on the run and in the passing game. I’m hopeful for the Titans to take their momentum and try to stuff the Chiefs in this one.

As we all dashed to grab Damien Williams and secure him into their lineups, we were all taken aback when Thursday he tested positive for COVID and had to sit out Week 6. Herbert had a handsome showing with 19 rushing attempts for 97 yards and a touchdown, plus a pair of catches for 15 yards. In this offense, I think both backs will have value when they’re both starting, but while we await the necessary negative tests from Williams, Herbert will remain the RB 1 and give you a flex-worthy floor on this brutal bye week.

When the Rams lost Cam Akers and we saw them sign Michel in the offseason, many hoped for a possible running back by committee situation to emerge in LA. That has not happened and doesn’t appear to be on the horizon. Darrell Henderson Jr.’s volume dwarfs any usage for Michel. Even in a match-up where the Rams had a steady lead, Henderson still had 42 more snaps than Michel. He isn’t even seeing garbage time value. Make room on your bench for players that are seeing a steadier floor.

This was Eckler’s worst performance this season, he could not get it going against the Ravens this week. He only managed 6 rushing attempts for 7 yards, and 4 catches for 48 yards. The Chargers will look to fix the holes gouged by the Ravens during their Bye week. Going forward there will be brighter days ahead for Eckler so do not panic! Even with their next matchup against the Patriots, a great defense that has just been run over by both Zeke and Pollard.

As Jarvis Landry remains on IR and OBJ left Week 6 with a shoulder injury, Donovan People-Jones has slid into the wide receiver 1 slot for the Browns in Week 7. In Week 6 he was already a star with two touchdowns, four catches of his five targets, and 101 yards. Clearly, he has big-play potential and a favorable matchup against the Broncos ahead of him.

Should Tyler Lockett managers be worried with Geno Smith under center? I say YES, you should be worried. Though Lockett had seven targets this weekend, he was only able to make two catches on those targets for 35 yards. As the send Russell Wilson to IR, I’m making other plans for Lockett until I see it. Bye week woes might be the only reason he gets a start for me, and that would be for flex alone.

Jaylen Waddle finished as WR4 this week. The rookie had a whopping two touchdowns and 10 catches for 70 yards in his London debut; his best week so far this season. The question is will he be able to build on it? Both Parker and Preston Williams were out in this one which certainly shifted the targets around. However, with Waddle showing this level of efficiency with being the target leader for a week, the Dolphins would be remiss to not keep him higher in the pecking order. Monitor the many wounded receivers here (don’t forget Fuller is on IR now as well), there could still be big weeks on the horizon for Waddle, even next week as the Dolphins face the Falcons.

Until Logan Thomas returns, Ricky is a must-add. He played every snap this week, ran almost 40 routes, had four catches on his six targets and a touchdown. With such a high volume, on a team that looks like it will be playing from behind a lot, Ricky is a fantastic option for those struggling at the tight end position.

Sam, why is T.J.’s stock down? Did he not just have a good week? He had eight catches for 74 yards and 11 targets, the most he’s had in a game all season? Surely he’s back to form? While that’s one way to look at it, I’m taking this opportunity to trade him. He was a favorite of mine this offseason, but I’m looking for more stability on my rosters going forward. Based on his targets, other managers will be hoping for a late surge and you can capitalize on that. He has a lot of tough matchups on the slate and with a target on his back as the best offensive weapon in Detroit, the double coverage isn’t stopping anytime soon. This week he faces the Rams, I’d save myself the anxiety, and part ways now.

While the Steelers have a bye this week, don’t go dropping Freiermuth (unless your league has the smallest of benches then sure I get it). With Juju out, Tomlin said it would be a team effort is sharing the workload. The first week into that, Freiermuth had 60% of the snaps and caught all seven of his targets. Love the efficiency. I love him going forward so even after this bye week, keep him in mind and rostered for your streaming potential.