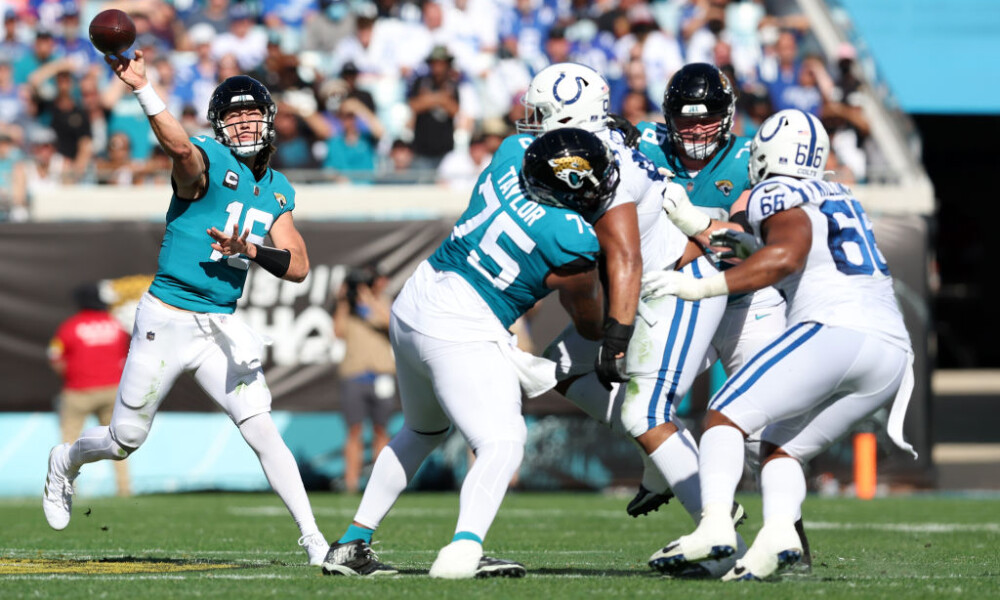 As the calendar turns from May to June, the anticipation and intensity begin to ramp up throughout each NFL organization. We get our first glimpses of some promising rookies on the field, as well as each team’s most prized offseason pickups. We turn our attention to the AFC South, one of the more intriguing divisions in the league due to the vast number of offseason moves being made by each team from top to bottom. With OTA’s wrapping up and minicamps now in the spotlight, let’s take a look at some of the biggest player storylines to watch in the AFC South throughout camp and the preseason.

Moving on from Deshaun Watson

After finally trading Deshaun Watson and his messy legal situation to Cleveland, the Texans received a haul of draft picks (including three first-rounders) and armed themselves with draft capital both for this past draft and future seasons. Bolstering the defensive secondary was a clear priority for the Texans, as they drafted LSU’s Derek Stingley Jr. with the third overall pick and Baylor safety Jalen Pitre in the second round. Houston also used their second first-rounder, the 15th pick overall, on Texas A&M guard Kenyon Green, giving QB Davis Mills another premier pass protector as well as a dominant run blocker. Head coach Lovie Smith has not been shy in praising his rookies, calling Pitre “outstanding” so far in OTAs, also noting “you can say the same thing about Kenyon (Green)”.

Regarding offensive skill positions, I’m interested to see how well second-round WR pick John Metchie III (Alabama) progresses in his rehab from a torn ACL suffered in December. If all goes smoothly, he can be an immediate contributor in the slot alongside Brandin Cooks and is an intriguing draft-and-stash option in dynasty and deep PPR leagues.

Another Texans rookie with a chance to shine in camp is former Florida running back Dameon Pierce, drafted with the 107th pick in the fourth round. Pierce is one of the hardest-working backs I’ve seen in recent memory with the way he fights for every yard and squares up with the best of them in pass protection. Despite starting only one game for the Gators in 2021, Pierce finished the season with 13 rushing touchdowns, three receiving scores and a very respectable 5.7 YPC. He still has a lot of juice left in his legs, only eclipsing 100 carries in a season once in 2020.

As the team reconvenes for minicamp, I’m interested to see where he falls into place in the depth chart behind current starter Marlon Mack. As camp rolls on, keep an eye on Houston’s young core as the rebuild continues and things start trending in the right direction under Lovie Smith and GM Nick Caserio.

Is Matty Ice the Key Piece?

There seems to be nothing but green flags waving in Indy, as GM Chris Ballard and head coach Frank Reich had a busy offseason wheeling and dealing for some big names in pursuit of a deep playoff run. Indianapolis welcomed three new vets in the offseason, trading for Matt Ryan and Yannick Ngakoue and signing Stephon Gilmore in free agency. Ngakoue and Gilmore (if healthy) should fortify an already-stout defense under new DC Gus Bradley.

Ryan leaves a struggling Atlanta Falcons team that has failed to eclipse the .500 mark for the past four seasons and takes the reins of an offense that heavily relied on all-world RB1 Jonathan Taylor last year to carry the load. His introduction to this offense with Reich calling plays should take some of the burdens off of Taylor and give the team the steady hand at QB they have craved since Andrew Luck’s last season in 2018.

“Matty Ice” has already garnered praise from Reich and the rest of the team during OTAs and minicamp, with Reich calling Ryan’s accuracy “insane” and recently re-signed tight end Mo Alie-Cox saying “You come out of your break and you better be ready [because]... the ball is gonna be on point.” Ryan’s veteran presence has already been noted and felt by the team in the locker room as well.

This begs the question: how much of a leap will third-year wideout Michael Pittman Jr. make with Ryan under center? He seems to think it will be significant. When asked about how much room he has for improvement after a solid sophomore campaign, Pittman told reporters “I’m trying to build on that and become that definite Receiver No. 1 that everybody talks about.” Finishing as the WR17 in PPR formats in 2021, Pittman has a fighter’s chance to leapfrog into the top 12 in 2022 paired with Ryan. I’m excited to see Ryan’s leadership and chemistry with his top weapons in Pittman and Cox, as well as Parris Campbell and second-round pick Alec Pierce (Cincinnati) continue to blossom as camp progresses.

Fresh Faces in the Receiver Room

Ryan Tannehill has his work cut out for him when it comes to finding a groove with all his new targets in 2022. After releasing Julio Jones and trading A.J. Brown to Philadelphia, the Titans will be looking for production from some new contributors. Newcomers Robert Woods and Austin Hooper will offer a veteran presence with proven production, and this is a great opportunity for young returning players such as Nick Westbrook-Ikhine (38/476/4 in 2021) to carve out a bigger role for himself in his second year.

Still recovering from a torn ACL in November of 2021, Woods is looking for an opportunity to regain the role of a true #1 receiver in this Titans offense. Austin Hooper seems to be transitioning well in Nashville after signing a one-year, $6 million deal with Tennessee. Tannehill and his new red zone threat have been wasting no time establishing a connection, with reports that they have been putting in extra goal-line reps during special teams periods.

Another newcomer to the receiver room is rookie Treylon Burks, drafted with the 18th overall pick almost immediately after the A.J. Brown trade with the Eagles. The Arkansas standout projects to be a similar receiver to Brown, with a big frame and ability to make catches in traffic with the physical tools to be a mismatch threat. However, there have been recent concerns in the Titans’ OTA’s that Burks’ physical conditioning is not where it needs to be, missing significant portions of practices and drills. Even during the combine, Burks posted a subpar 4.55 40 time.

Titans receivers coach Rob Moore revealed on Tuesday’s practice that Burks has been suffering from some asthma episodes, but there also seems to be some underlying concerns with his health that the Titans coaching staff remains tight-lipped about. Derrick Henry will continue to be the main source of offensive firepower with Tennessee’s style of smash-mouth football, but it’ll definitely be worth keeping track of how well Tannehill and his new weapons continue to gel leading up to the season.

Can Trevor and Travis Make the Leap?

With only two winning seasons in the last 15 years, the Jags have been bottom-dwellers for longer than nearly any other franchise in recent memory. Some of the misery has been self-inflicted, such as hiring Urban Meyer as head coach for the 2021 season and seeing how that situation imploded. Now with a competent, offensive-minded Super Bowl-winning head coach in Doug Pederson, this team looks poised to take the next step with a young core revolving around second-year QB Trevor Lawrence.

He will have an experienced receiving corps with the addition of Christian Kirk and Evan Engram to go alongside veterans Marvin Jones Jr. and Zay Jones. Jacksonville did not hesitate to improve their paltry defense through the draft, selecting Georgia edge rusher Travon Walker with the #1 overall pick in April as well as four other defensive selections. Beefing up the o-line for Lawrence will be key as well, which the Jags only partially addressed in the draft by picking center Luke Fortner out of Kentucky.

Word out of Jacksonville seems to all be positive, with Doug Pederson praising Lawrence for his continued development and leadership at the helm of the offense and stating “He's leading the football team, No. 1. He's executing the offense. We've obviously been impressed with him throwing the football – and how easy it is for him to throw”.

Lawrence himself seems to be excited about this new offensive scheme, telling reporters on Tuesday “it allows us to play fast”. The second-year signal-caller also noted the improved chemistry and camaraderie between the coaching staff and players, noting "We have a lot of really good players. The coaching staff, just the way everything's been structured, the way they've approached everything, the leadership … all those things I think are going to help us a ton. The mindset of the team has been great”.

Another former Clemson standout looking to bounce back in his sophomore campaign is running back Travis Etienne, now fully recovered from a Linsfranc injury that sidelined him for his entire rookie season. When asked about Etienne’s impact and versatility in both the running and passing game, Pederson replied “Gosh, it’s just exciting to get him out here and get him on the grass this whole offseason and really work with him…putting him in different spots… it’s fun”. Etienne himself has stated his desire to play a role similar to that of a Deebo Samuel, making an impact as a runner and receiver. I’m looking forward to seeing how well this young Jags core will perform with a competent NFL coaching staff, utilizing a healthy Travis Etienne and surrounding Lawrence with the weapons he deserves as the face of the franchise.