Jack looks at the biggest storylines for the NFC West during training camp. 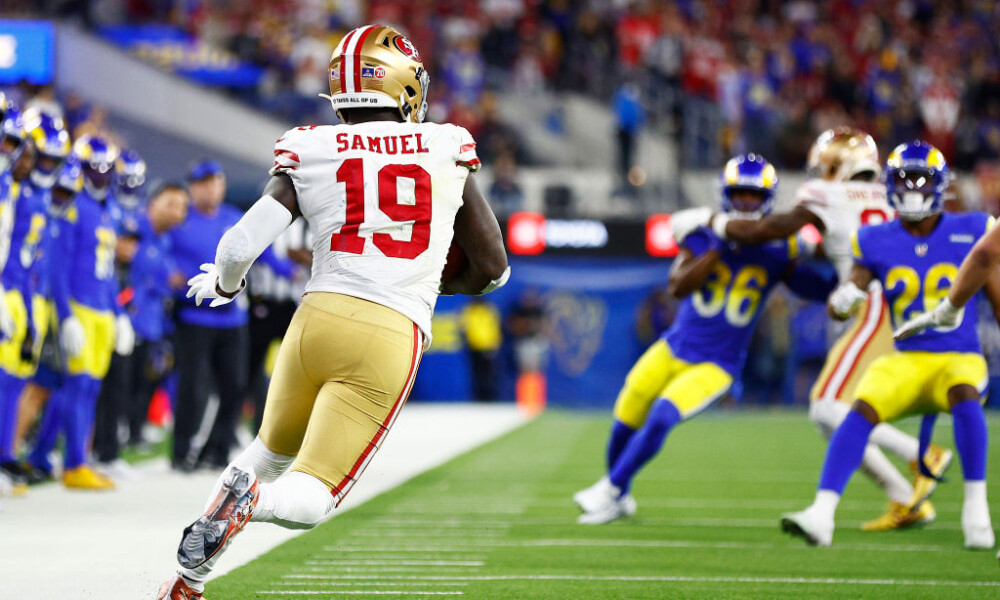 The NFC West is arguably the best division in the NFL as it features three playoff contenders as well as the reigning Super Bowl Champion Los Angeles Rams. This division is stacked with talent and this causes it to be one of the more interesting divisions to follow for fantasy purposes. This article will break down some training camp headlines to monitor for each NFC West team.

Which Wide Receiver(s) Steps Up During DeAndre Hopkins’ Absence?

Possibly the most notable headline to come out of Arizona this offseason (other than quarterback Kyler Murray’s contract dispute) was the news of superstar wide receiver DeAndre Hopkins’ six-game suspension for violating the NFL’s PED policy. Prior to the suspension, Hopkins was often referred to as one of, if not the best receiver in the NFL. He had posted four consecutive 1,000+ yard receiving seasons before an injury-riddled 2021-22 season. Hopkins’ absence will open the door for other Cardinal receivers to see increased production during the early weeks of the season. The question still remains of which wide receiver will it be who steps up?

The two most likely names to fill Hopkins’ shoes are newly acquired receiver Marquise “Hollywood” Brown and second-year receiver Rondale Moore. Brown quietly had over 1,000 yards receiving last season but was often overlooked due to the Ravens using a rush-heavy scheme. He will have an even larger opportunity given that he will likely be the WR1 while Hopkins is out and the Cardinals offense will pass the ball more than the Ravens did.

Moore did not produce much as a rookie as he only had 435 yards receiving but as the season went on the Cardinals started using him in various unique ways. Moore will likely be asked to take on a larger role in order to fill the hole that was left by Hopkins’ suspension. The Cardinals will also likely scheme a few plays designed to get the ball in Moore’s hands in unique ways. Similar to what San Francisco did with Deebo Samuel last season but not as extreme. It is likely that both Brown and Moore produce well in PPR formats this season, even when Hopkins does eventually return.

Who Become the Lead Back This Season?

The reigning Super Bowl Champion Los Angeles Rams have arguably one of the best running back tandems in the league with Cam Akers and Darrell Henderson. Akers appeared to be in line for a huge 2021-22 season but unfortunately, a torn achilles suffered in training camp caused him to miss most of the season. Akers was able to return for the playoff run and was given the bulk of the carries but his YPC was very low.

Clearly, the Rams coaching staff is very high on Akers and it is likely he has a very strong 2022-23 season as he appears to be fully recovered from his injury. However, Darrell Henderson had a solid season in his own right filling in for Akers last season. It will be important to monitor how the carries are distributed throughout training camp and preseason games as it drastically affects Akers’ fantasy value. If he splits carries with Henderson his value takes a significant hit but if he becomes a three-down workhorse he could easily be one of the top fantasy running backs this upcoming season.

All off-season there were a ton of moves made surrounding wide receivers. Big names like Tyreek Hill, A.J. Brown and Marquise Brown were all traded to new teams this off-season and it felt like nobody saw any of these moves coming. In the midst of all those moves, Deebo Samuel reportedly asked to be traded from the 49ers which was a major shock around the league. The reasoning for this request appears to be that Samuel was unhappy with the number of carries he was receiving in the rushing game.

Last season, Samuel finished with the second most overall fantasy points, behind only Rams receiver Cooper Kupp. Samuel’s versatility is a major part of what makes him such a dynamic player. If his overall number of touches goes down he will likely not be as valuable for fantasy teams. It will be important to monitor how the 49ers handle this issue in training camp this summer.

Will Trey Lance be the Starter in 2022 for San Francisco?

2021 third overall pick Trey Lance has yet to play many meaningful snaps during his NFL career but that could very likely change this summer. Other 49ers quarterback Jimmy Garoppolo underwent shoulder surgery on his throwing shoulder which will likely sideline him for most of training camp. This is a major opportunity for Trey Lance as it opens the door for him to get significant practice reps with the first-team offense and will allow him to truly showcase his talent and knowledge of the playbook.

49ers head coach Kyle Shanahan has refused to commit to a starting quarterback for the 2022 season but with it being rumored that Garoppolo could be traded it appears that Trey Lance will start this season bearing any significant changes. If Lance does start this season under center for San Francisco, he will likely be very effective given how quarterback-friendly the 49ers offense is and his rushing abilities also add to his fantasy value. It will be important to monitor how Lance performs in training camp this summer because, at the moment, he appears to be on the right track toward becoming a starting NFL quarterback for the 2022-23 NFL season.

Who Wins The Quarterback Battle?

In a major trade, the Seattle Seahawks traded away franchise icon Russell Wilson to the Denver Broncos for a package of draft picks and players. One of the players acquired in that trade was quarterback Drew Lock who appears to be set to compete with Geno Smith for the team’s starting quarterback job in training camp.

Many around the league expected the Seahawks to make a move for another veteran quarterback or possibly draft one to add to the competition. As of this moment, the Seahawks have done neither and they appear content with both Lock and Smith. Head coach Pete Carroll has done nothing but praise Lock since the team has acquired him so the organization clearly feels committed to him. If Lock does emerge as the starter for Seattle this season, it will be interesting to monitor how he plays given that he struggled in Denver when he was starting there.

How Many Touches Will Kenneth Walker See as a Rookie?

Perhaps one of the most exciting fantasy-related picks of this year’s NFL Draft was Kenneth Walker landing in Seattle. On paper, the landing spot does not seem that exciting but with Chris Carson and Rashaad Penny’s injury history, it is possible the Seahawks are looking for a true workhorse back to put in their backfield. It is also worth mentioning that historically, Pete Carroll’s offenses have featured workhorse backs in the past (think back to the Marshawn Lynch era).

During training camp, it will be important to be on the lookout for updates on how Walker looks during camp and how many overall touches he appears to be getting. If Walker does emerge as the lead back in Seattle this season it is possible he becomes one of this season’s top running backs.