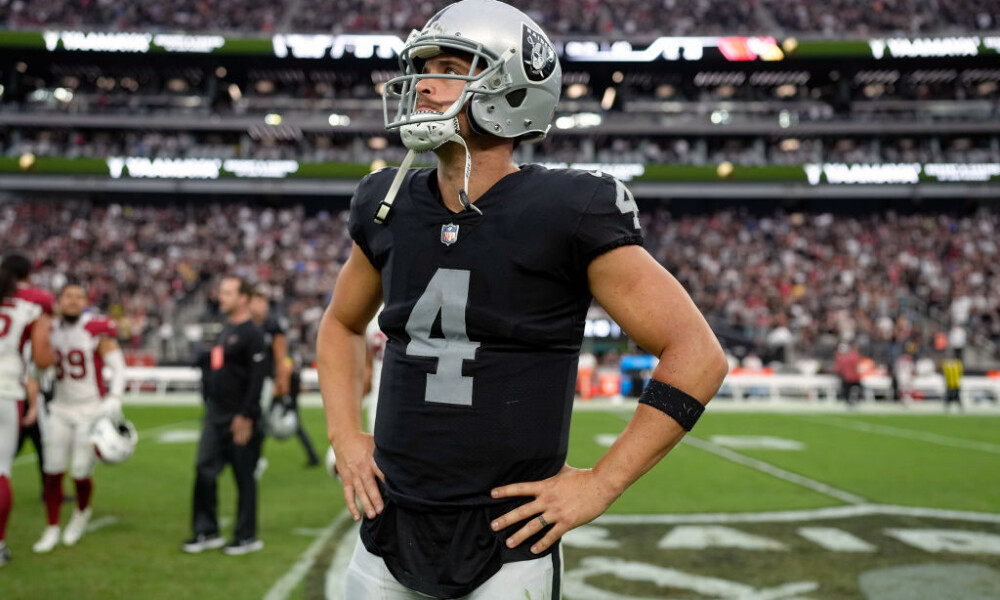 As more and more teams are eliminated from the NFL Playoffs, the quarterback speculation around the league continues to grow. One of the most prominent names available this offseason is Las Vegas Raiders’ Quarterback Derek Carr. With Carr saying his goodbyes to the organization on Twitter a few days ago, let's take a look at some potential landing spots for the signal caller in 2023.

Perhaps the most obvious team that will be looking for a quarterback upgrade this offseason is the New York Jets. Last week Jets’ chairman Woody Johnson said that he would “absolutely” be willing to pay to bring in a veteran quarterback this offseason. As the season progressed in New York, it was clear that their roster was held back by poor quarterback play as they finished the season 0-6 and failed to score a touchdown in the final three games of the year, which resulted in the team missing the playoffs yet again.

Despite the poor QB play, the Jets’ roster is in very good shape as a whole. The defense finished in the top five of most categories this season and would easily be the best defense Carr has ever had in his career. They also have a very strong core of young talent on offense. Receivers Garrett Wilson and Elijah Moore are a very strong duo, and running back Breece Hall should pick up where he left off once he returns next season, which gives Carr some nice weapons at his disposal.

Carr would also allow Zach Wilson to be able to sit and learn from an established veteran. Wilson struggled in his second NFL season, and it is clear that he needs to improve in a number of areas before he can be trusted as a starter once again. Learning from Carr could be a great opportunity for him.

At the moment, the Saints appear to be stuck in no-man's-land at the quarterback position. They do not possess a first-round pick in this spring’s NFL Draft, so adding a QB that way could be tough. Although, if a Sean Payton trade does happen, they could acquire a first-round selection that way.

If the Saints prefer to go the veteran route rather than starting a rookie, then Derek Carr makes sense. Current Saints head coach Dennis Allen was with the Raiders during Carr’s rookie season in 2014, so it is possible that there is a relationship already in place between the two that could lead to Carr potentially heading to New Orleans next season.

The Panthers have tried pretty much everything to try to find their long-term answer at quarterback. They traded for Sam Darnold two offseasons ago and signed Baker Mayfield to be their starter this year. Unfortunately, neither worked out, so the Panthers are yet again looking for a new quarterback.

With the uncertainty around Tom Brad and the Tampa Bay Buccaneers, the NFC South appears to be up for grabs next season. If the Panthers are able to bring in Carr, he would possibly be the best QB in their division next season.

The Panthers also have a large number of draft picks to play with this offseason, so they could quickly build an exciting team for next season with Carr under center. That being said, the Panthers do currently hold the ninth overall selection in the 2023 NFL Draft, which means that they may opt to trade up or select a quarterback with their pick instead of pursuing a veteran like Carr.

The Colts have been looking for an answer at quarterback ever since Andrew Luck retired, and they might be the co-favorites with the Jets to land Derek Carr this offseason.

Prior to the start of the 2022 season, the Colts traded for quarterback Matt Ryan in the hopes that he could lead them back to the playoffs. Unfortunately, Ryan didn't work out in Indianapolis, and he ended up being benched several times as the season went on. With the Colts finishing the season with a 4-12-1 record, they are in possession of the fourth overall pick in the 2023 NFL Draft.

Having such a high pick places the Colts in prime QB territory, but they may go an alternate route and opt for a more veteran presence rather than starting a rookie. While it is very possible that the Colts do select a quarterback in April’s draft, it can also be argued that trading that pick to acquire more assets while bringing in Derek Carr will allow them to compete for the AFC South title in 2023. Given the Colts' recent history of targeting veteran QBs, this is certainly a possibility.

The Commanders’ quarterback situation was cloudy throughout the 2022 season. They started the season with Carson Wentz, then made the switch to Taylor Heinicke, then ended with rookie Sam Howell making his first career start in Week 18.

The early reports are that the Commanders are going to enter the season with Howell as their starter, but it is still very early in the offseason process, so all options should remain on the table. Current Commanders defensive coordinator Jack Del Rio was the Raiders' head coach from 2015-2017, some of Derek Carr’s best seasons.

Bringing in Carr also makes sense since it would allow for the Commanders’ young group of skill position players to finally have some consistent quarterback play. If Carr is brought in, receivers Terry McLaurin and Jahan Dotson should both see value increases, and running backs Antonio Gibson and Brian Robinson Jr. should also have more running lanes.

This landing spot is highly dependent on what Tom Brady decides to do following the Buccaneers' early playoff exit. If Brady retires or signs elsewhere for 2023, then the Bucs bringing in Carr makes a lot of sense.

The Bucs' roster is a very good landing spot for a QB, as receivers Mike Evans and Chris Godwin make up one of the best duos in the league and both remain under contract. The Florida weather is also always a plus, and the NFC South was underwhelming this past season, which means that if Carr were to land in Tampa he could have an easy path to the playoffs.

Perhaps the biggest obstacle in bringing Carr to Tampa Bay is the Bucs' current salary cap situation, as they don't currently have much cap space.  However, if Brady does retire or sign elsewhere, that should allow the Bucs to have enough space to negotiate and bring Carr in for the 2023 season.