From Underdog to Wonderdog: Nick Raducanu says if you haven't tried Best Ball fantasy football drafts, you're missing out. He's right. And it's not just because he's obsessed with 3-person and 6-person drafts. 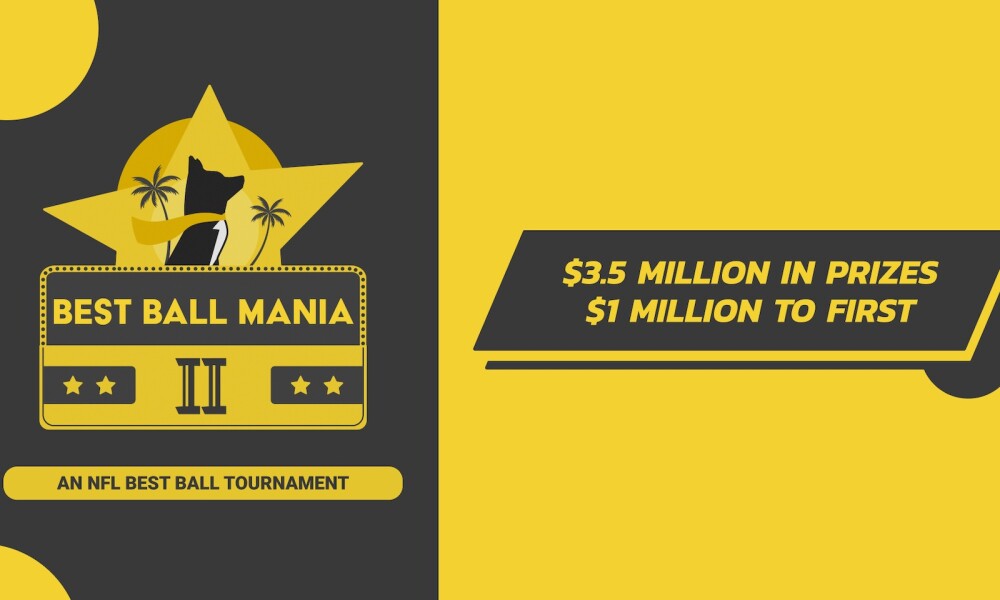 We can all agree that the draft is the best part of fantasy football, right? RIGHT?!

So what would you say if I told you that you could replay the best part of fantasy football over and over again? Well, Best Ball drafts allow us to do exactly that! And Dr. Roto has partnered with Underdog Fantasy to get you started with a special deposit bonus!

Go to underdogfantasy.com, the app store or the Google Play store, sign up with the code DOC, and get a free $25 in bonus cash!

What Is Best Ball?

It’s pretty simple. Best Ball is nothing more than a draft. No waivers, no trades, no setting (or forgetting to set) your lineup each week. All you have to do is draft your roster of 18 total players and move on with your day. The software at Underdog will take your player totals for any given week and choose the best quarterback score, two best running back scores, three best wide receiver scores and best tight end score.

How Does The Scoring Work?

Should I Use The Same Strategy For Best Ball That I Would In My Normal Leagues?

Yes and no. You’re still playing fantasy football, so what you know about Alvin Kamara and Tyreek Hill isn’t going to change just because you’re playing Best Ball. However, you want to maximize your ceiling for each week, so it’s OK to introduce a little more volatility (read: higher-ceiling players) to the mix. So for example, a lot of people shy away from Tyler Lockett in their normal fantasy leagues because he’s been a boom-or-bust player. That’s understandable when you might be counting on him from week to week as your WR2. But you’re very likely not going to have to use his bust week scores in Best Ball since you’ll probably have other wide receivers with higher scores to replace him.

How Many Of Each Position Should I Draft?

You get 18 total roster spots on Underdog (which thankfully doesn’t include a kicker or defense!), but as I mentioned, only 1 QB, 2 RBs, 3 WRs and 1 TE actually count each week. If you feel good about your quarterback spot (let’s say, Mahomes and Tom Brady), then you probably only have to draft two. If you decide to wait on quarterback and have Kirk Cousins and Mayfield as your two quarterbacks, you might want to take a flier on someone like Zach Wilson a little later in your draft just to be safe. The same principle would apply for tight ends, but I generally like to draft only two quarterbacks and two tight ends because it lets me load up on running backs and wide receivers since you need more than one weekly score at those positions. I’ve seen people draft anywhere from four to seven running backs and anywhere from five to nine wide receivers. Again, this depends on your league size and comfort level with your positional depth, but I usually like to land at 5-6 running backs and 7-8 wide receivers.

Is There Anything Else I Should Know?

Two things before I let you go:

Check out the best Fantasy Football Draft Kit in the industry with featured content from Dr. Roto, Jayson Braddock and more!

I hope you’ve found this Best Ball primer useful and enjoy Underdog as much as I have all summer. Don’t forget to sign up using the link below for a special deposit bonus. Happy drafting!

Remember: Go to underdogfantasy.com, the app store or the Google Play store, sign up with the code DOC, and get a free $25 in bonus cash!