How about we start a new tradition this Thanksgiving: Use Eric Romoff's top Thanksgiving NFL DFS plays and WIN! 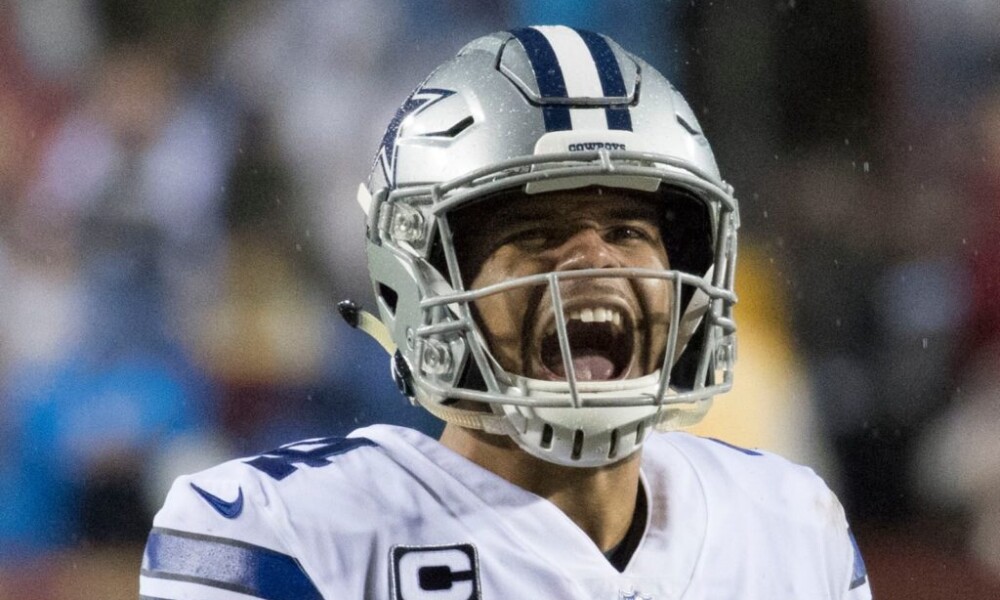 There is something just so perfect about NFL football as the backdrop to your Thanksgiving day. Its a great way to find common ground with the new people to your Thanksgiving celebration or to zero in and avoid unwanted conversations with the in-laws. Whatever role it may play in your plans on Thursday, your day will be undeniably better because of it. One of my favorite aspects of the Thanksgiving slate is getting some DFS action on the board and enjoying the sweat well into the night. This year’s lineup eases us in with a bit of a clunker between the Bears and the Lions before ratcheting up the intensity with two games that hold playoff implications as the Cowboys square off with the Raiders followed by the Bills vs. the Saints. I love this slate and its partly because some of my best DFS days have come on Thanksgiving. Its just enough games to do want you want with your builds but small enough where the chalk is easy to identify and leveraging off that chalk can vault you up the payscale very quickly.  The nature of these small slates is one where you have to prioritize the raw points that many of the popular players will bring while finding ways to get different with how you construct your lineup overall and that is exactly the strategy I’ll be taking to the slate come turkey time.

We are likely going to see somewhere around 75% of the ownership on this slate fall onto two guys at the Quarterback position and Josh Allen is projected to not only be the highest owned at his position but also the highest-owned player on the entire slate. He is currently the highest-projected player on the slate at 25.6 DraftKings points, which almost perfectly aligns with his season average of 25.4, and now gets to square off with a Saints defense that is allowing 361.3 passing yards per game at home and the seventh-most Draft Kings points to quarterback on the season. Josh Allen is really the only player with 30 points near his median projection and this is one of those slates where you have to prioritize raw scoring. I am eating the chalk with Allen and looking to differentiate elsewhere.

If you are looking to pay down or get different at the quarterback position, Derek Carr is my favorite way to do so. Carr is completing nearly 300 passing yards per game, is tied for sixth with 37.4 attempts per game, and walks into a game script where the Cowboys are favored by 7.5 and the Raiders are likely to be throwing. While most people know Cowboys CB Trevon Diggs as the ball-hawking corner with eight interceptions on his ledger this season, just below the surface we also find that his aggression can also leave him getting burned for big plays. You’ll have to consider double, or even triple-stacking Carr to really tap into Allen levels of upside but fortunately doing so is still relatively inexpensive.

Dak’s ownership tomorrow is hinging on the availability of both CeeDee Lamb and Ezekiel Elliott. Should either of those players be ruled out, especially CeeDee, I’d expect Prescott’s ownership to slide down to the 10% range. If I’m mass multi-entering I love the idea of being 2-3x the field on a player of Dak’s ability.

The early game is likely going to feature the two chalkiest running backs on the board this thanksgiving. The lesser owned of the two, by a fair amount, is going to be D’Andre Swift. Coming off of back-to-back 130+ yard games, Swift can easily be the highest-scoring runner on the slate and the $1,800 premium he carries compared to David Montgomery will likely steer fantasy players away. His opponent in the Bears has been hemorrhaging yards on the ground but doing a decent job stopping people from getting into the end zone. Now without both Khalil Mack and Akiem Hicks, I’d expect the likelihood of a rushing score to increase for Swift and I love getting exposure to him on the Thanksgiving slate.

Mark Ingram might be my favorite play on the board today. Now that Alvin Kamara has been ruled out it’s fair to expect Ingram to flirt with 90% of the backfield workload today. Ingram himself is carrying a questionable tag and that is the basis of my love for this play. With the slate's premier runners all kicking off earlier and uncertainty around Ingram‘s availability, I project him to come in at single-digit ownership. That type of leverage is where these short slates are won and I’ll be significantly overweight to the field on Ingram.

As with the other pay-up options today, the decision to play Diggs is relatively straightforward. He carries the highest projected point total among the wide receivers and is on the very short list of players that can finish the day having scored the most points. Pairing him with Josh Allen is a + EV decision and their price tags might make that a less popular stack than you’d imagine. Fortunately the pricing is relatively soft, especially on DraftKings, and there are plenty of ways for you to fit both into your lineup. Diggs is one of those locked-in plays where you’ll build your foundation of scoring for the day.

There’s a lot to love about the Cedrick Wilson play today. Depending on CeeDee Lamb‘s availability, Wilson will line up as either the second or third receiving option in an offense that has supported three pass-catchers for years now. Even with Lamb on the field last week, Wilson put up a respectable 4/36 line and barely dropped two passes that would have exponentially increased his scoring. His performance from last week would put him north of 2X value on his $3,500 price tag today and there is a reason to expect him to see significantly more work. I actually prefer this play if CeeDee Lamb gives it a go today, which will drive Wilson’s ownership way down and create a ton of leverage against the field.

Darren Waller is the sixth-highest projected Player on the slate and the highest projected tight end by an order of magnitude. Waller's season has been a bit up and down, but he has been coming on as of late and is the only tight end on the board with 10 targets being near the median point of his projection. In a game where the Raiders are big underdogs and forecasted to be throwing, I like Darren Waller to see plenty of opportunity and to finish the day as the top-scoring tight end. As was the case with the other premier options at their position, expect Waller to be very popular but head in with a level of comfort eating that chalk.

This is one of those calculated risks that you have to take in order to separate yourself from the field on a short slate. Adam Trautman turned in a 5/58/1 effort the last time out but has headed to the IR with a knee injury this week. This clears the way for Johnson, who is easily the Saints most athletic option that position, to see considerable opportunity on Thanksgiving. He stepped in as the primary backfill when Trautman left last weeks game and we all remember his two touchdown explosion in Week 1 against the Packers. Beyond his low ownership itself, I really like the idea of playing two tight ends today and will have Johnson in my flex spot for many builds.

This might be your only time all year to fire up the lions defense. To their credit they have been playing decently over their last two weeks but the decision to roster them here is circumstantial. As a position where you can only roster one player, DST is a fantastic place to find leverage on a short slate. The Lions get to face off against Andy Dalton and a Matt Nagy that may have already been fired but is still coaching today. This has dumpster fire written all over it and a solid showing by the Lions D can improve your standing quickly on the leaderboard.