Trevor Hillstrom sorts through an intriguing Week 14 of NFL action to identify the top DFS plays to help you get in the green. 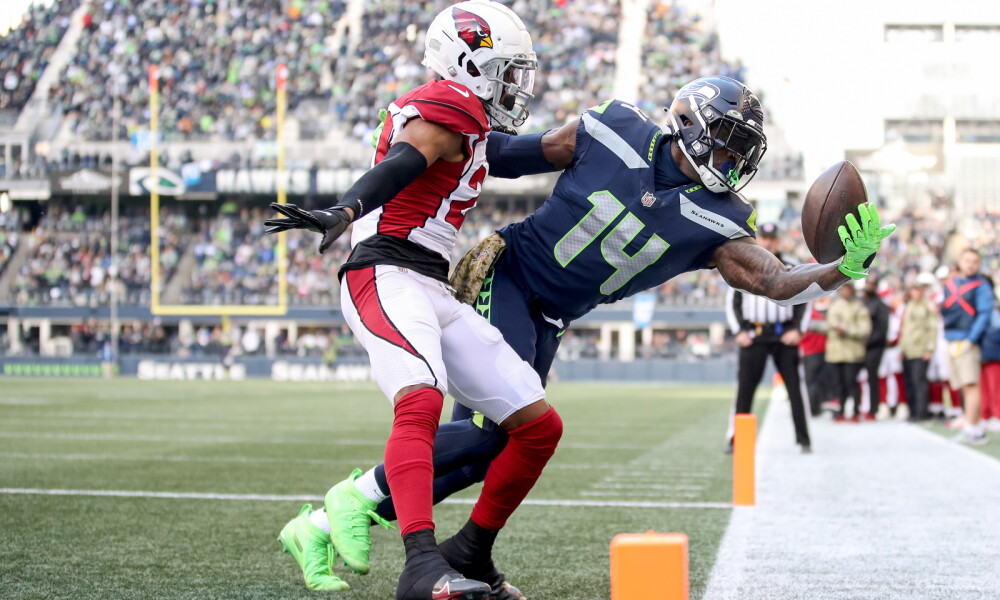 The early and late slates for Week 14 NFL DFS presents some interesting strategies and decisions? The early slate has the big matchup between the Kansas City Chiefs and the Las Vegas Raiders in which players from both sides will be heavily owned. Who emerges as the pass-catcher for the Tennessee Titans? Meanwhile, the late slate features the Buffalo Bills at the Tampa Bay Buccaneers and has the highest over/under total on the board. Here are my value plays for Week 14.

The highest priced QB on the board, he has the highest floor and ceiling. He had 39.2 fantasy points several weeks ago in Las Vegas and has the weapons to duplicate those numbers in week 14. Value plays will be crucial for those who make Mahomes their QB on Sunday.

Seattle threw the ball 37 times last week and I look for the trend to continue against a soft Houston defense. Wilson’s surgically repaired hand looked better last week and he has two stud receivers who need to be fed the ball. Dare I say 300 yards and 3 TDs for Russ this week? Yes!

Newton was awful his last time out against the Dolphins but this week they are at home off a bye against a mediocre Atlanta Falcon defense. Look for Newton to get back to the numbers he had against Washington at home 25 plus fantasy points.

Kamara is finally back from injury and should get the bulk of the workload against the worst NFL run defense in the New York Jets. The Saints will also be without RB Mark Ingram and QB Taysom Hill is nursing a finger injury. The sky is the limit!

Great matchup this week vs a porous Las Vegas Raider run defense. I will be playing him in most lineups that do not have Pat Mahomes. The points have to come from somewhere! Helaire missed the first meeting between these two and backup RB Darrell Williams got 32.4 FPTs so a big day for CEH could be in store.

He has a great matchup against the Jacksonville Jaguars and I think he will lead the Titans in touches. The Titans are really decimated at receiver and I would expect him to get 20 carries leading to 20 FPTs.

Washington is one of the worst defenses against the pass and CeeDee has been Dak Prescott’s go-to man. CeeDee hasn't scored a touchdown in his past two games but that ends on Sunday. Give him 100 yards and a TD for 23 fantasy points.

Seattle’s offense took some strides last week against the San Francisco 49ers and I look for them to expand on that at Houston. DK got eight targets last week and Russell Wilson should feed him the ball. He finds the end zone this week after coming a yard away last week.

I want to find a Titans WR who could be a hidden gem. He had a 7 catch 100-yard performance in Week 11 vs Houston Texans. I look for him to be the number one target at the WR position this week.

Kelce is the best tight end in football and this week he has a great matchup vs the Las Vegas Raiders. Monday Night he had only 5.7 fantasy points but I am expecting him to be the main target for QB Patrick Mahomes this week. I have him pegged for 20 FPTs.

The Seahawks have a great matchup against the Houston Texans. Everett has had 15 targets the past 2 weeks and he should receive the same here this Sunday. I predict he makes the end zone for 15 FPTs.

I will be playing Allen in most of my late slate lineups. This game has the highest total on the board and Buffalo doesn’t run the ball very well. Tampa Bay is very good against the run but is suspect vs the pass. Allen did what he could vs. New England in the wind. He bounces back this week with a 25 plus fantasy point performance this week.

Teddy will be my punt option at QB to make my lineup a little different. He has a nice matchup against the Detroit Lions. I look for Denver to put up a ton of points this weekend and absolutely smash here. It’s just a question if they score through the air or on the ground.

High price to pay but the Chargers could be out of weapons if WRs Keenan Allen and Mike Williams are not cleared to play due to Covid 19 protocols. He has the lowest floor and highest ceiling for running backs for the late slate. Count him for 20 plus FPTs.

Barkley has had his share of injuries but the talent is still there. He is a back who can break the slate any Sunday and he has a good matchup vs the Chargers who are 26th vs the run. Also, Barkley has 6 receptions last week on 9 targets. Hopefully, that’s a sign for good things to come.

Wow, did you see this guy play Monday Night? It is obvious that he should be the featured back for the Broncos going forward and hopefully, the coaches agree. This week he gets a great matchup at home vs Detroit. I am banking on Williams to handle most of the load while Melvin Gordon has been limited in practice this week.

Wilson is a late swap only if RB Eli Mitchell is held out. Cincinnati’s run defense has been leaky of late and I will take my chances on Wilson at this price if he is the lead back.

I am picking Evans over WR Chris Godwin this week because he is $500 cheaper. Evans is still getting double-digit targets and the injury to Bills CB Tre’Davious White will haunt them in this game. Evans for 20 plus fantasy points.

The targets are there every week and I like volume. Cincinnati’s defense isn’t very good and if RB Eli Mitchell or WR Deebo Samuel are out then I would look for Aiyuk to get some carries as well.

I seem to have Jeudy in my slates every week because he has such athletic ability. This week it’s time for him to prove he was worth the 15th pick in the 2020 NFL Draft. I will be playing him in almost all my lineups as I think he breaks out with 8 catches for 80 yards and a TD against a very bad Detroit Secondary.

I think Tampa Bay Bay will pay a lot of attention to WR Stefon Diggs giving Sanders some opportunities. Sanders should be low-owned and can really shine in what Las Vegas expects to be a high-scoring game.

I placed these players because both could be options if WR Keenan Allen or WR Mike Williams are ruled out. Guyton would become a must-start if either one is ruled out and Palmer becomes a start if both are ruled out. Someone has to catch the ball and QB Justin Herbert can get the ball to whoever lines up at receiver.

The price for Gronk is starting to shoot up and for good reason. He is QB Tom Brady’s go-to target. Buffalo has been stingy vs. the tight end but I think Gronk is matchup proof. He is the only tight end I would spend up for.

Engram may be a great value play as I think most tight ends are highly over-priced. Engram has had 16 targets the past 3 weeks and last week caught 4 for 61 yards. Tight ends score at a high rate against the Chargers and I think he gets into the end zone this week.