Bryce lists the top four players he thinks will be fantasy football busts in the AFC South this season. 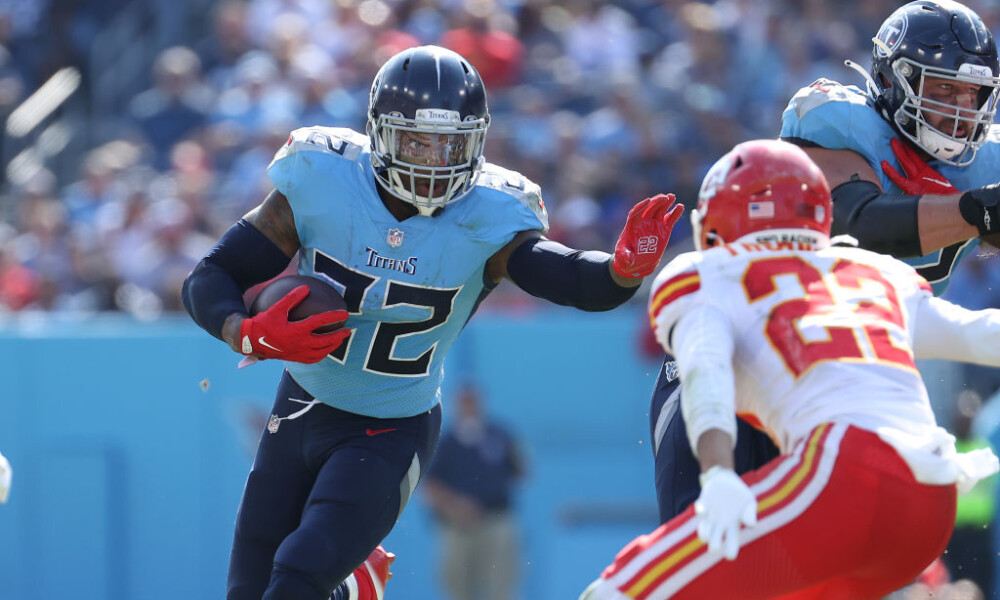 We’re going back to roots for this one! Back to the AFC South! A division that includes top tier names like Matt Ryan, Derrick Henry and Jonathan Taylor. But who will perform to their fantasy potential and who will be the one pick that you didn’t get the memo on?

Henry made it halfway through a dominant fantasy season in 2021, but a foot injury suffered in Week 8 kept him out the remaining nine games of the season. He returned for the Titans’ playoff game against the Bengals, however Henry did not impact the game as King Henry normally would. He totaled 20 carries but only mustered 62 yards. Folks, it may be finally happening. Another elite running back may have run his course. Heading into 2022, the Titans have retained Dontrell Hilliard and drafted Michigan’s Hassan Haskins to fill the backfield and potentially spell Henry throughout the regular season.

Henry is 28 years old and is coming off his first major injury. Do not get it wrong though, Henry will still get plenty touches and goal line work but he will still be a liability in the pass game. That’s where Hilliard and Haskins come into play. If last year’s playoff game is any indication of Henry’s future, fantasy owners with high draft picks could be setting themselves up for disappointment.

Kirk signed a 4 year/$84 million contract this offseason to join the Trevor Lawrence-led offense, but don’t believe the contract hype in terms of fantasy. Kirk never recorded a 1,000 yard season in four years with the Cardinals. Make no mistake that Kirk will get touches, however, the Jaguars have loaded up on weapons for Lawrence to use, so don't expect too much volumne.

The Jags also added Zay Jones and Evan Engram to go with Travis Etienne, Marvin Jones and Laviska Shenault. Once James Robinson is fully recovered from his Achilles’ injury, this offense will be even more crowded. Last year with the Cardinals, Kirk had a career-high six drops and averaged a career-low three yards after the catch. Given Lawrence’s chemistry with Marvin Jones last season, Kirk is not a shoe-in to be the top target on this team. Kirk is a WR3/Flex at best this season in most leagues.

Woods was traded in the offseason despite recovering from an ACL injury and being 30 years old. Woods’ long injury history should be reason for concern especially regarding fantasy. Yes, Woods is the likely top option for Ryan Tannehill following the draft night trade of A.J. Brown, but what will Woods look like on the field, and can he play all 17 games this season?

Even when he's on the field, Woods may be the top option, but the Titans did draft Treylon Burks to replace Brown. Burks will definitely get looks in this offense, which still will be few and far between due to the run-heavy offense Tennessee runs. Woods' ADP will likely creep up if he continues to appear healthy in training camp, but don't fall into the trap.

Pittman Jr. had a great sophomore season despite inconsistent quarterback play, posting over 1,000 yards and six touchdowns. The argument can be made Pittman Jr. will be even better with Matt Ryan under center, but not so fast! Ryan can elevate the play of anyone around him, but the amount of weapons available has increased for Indianapolis since last season. The Colts drafted WR Alec Pierce and a couple of big tight ends in this year’s draft, Parris Campbell is back healthy, and TE Mo Alie-Cox has been re-signed. Not to mention the backfield that features Jonathan Taylor, Nyheim Hines and now Phillip Lindsay.

It will be interesting to see if Ryan gravitates to Pittman Jr. as the go-to target as Ryan gravitated to Roddy White, Julio Jones, and Calvin Ridley during his time in Atlanta or if Frank Reich’s offensive scheme will force Ryan to spread the ball more evenly. Reich will more than likely win that battle so don’t bank on Pittman Jr. being a borderline WR1 or top-tier WR2. Manage your expectations when drafting Pittman Jr.