Bryce tackles one of this offseason's most-discussed fantasy football questions: Who should be the first WR off the board? 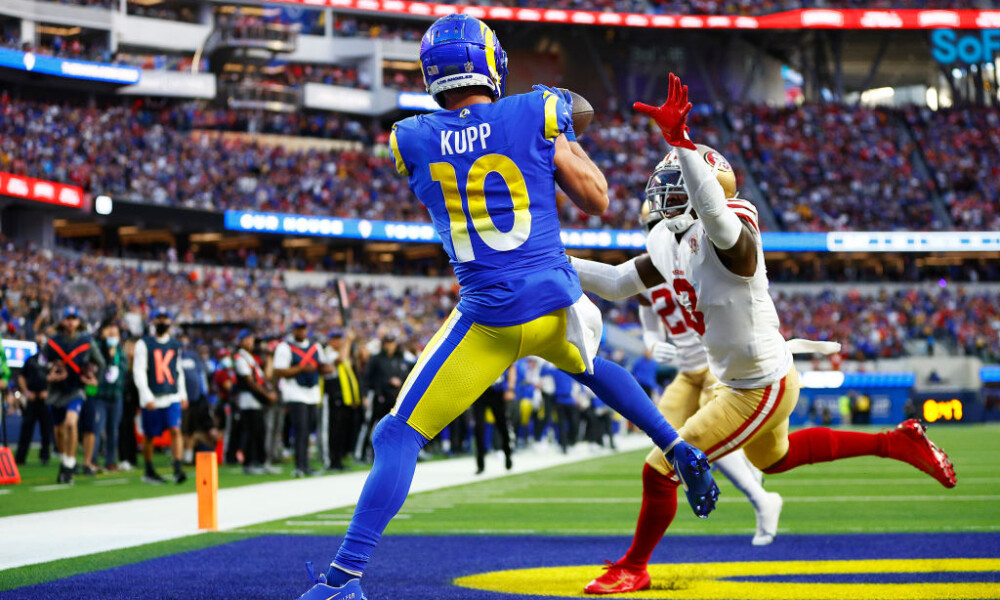 Cooper Kupp put up historical numbers last season and was far and away the best fantasy receiver no matter what format you played. Kupp’s 2021 campaign has vaulted him to the top of WR fantasy projections for the 2022 season. In most current fantasy rankings, a newly-paid Kupp is ranked as the top receiver over the consensus No. 2 ranked Justin Jefferson. But should Kupp be a lock as the first receiver taken in every draft?

Who Should be the Top WR on Your Board?

Let’s take a look at some other historical receiving seasons and how they fared the following season. In 2021, Kupp posted 145 catches for 1,947 yards and 16 touchdowns making that good enough to win the NFL WR Triple Crown. In 2012, Calvin Johnson set the record for most receiving yards in a season with 1,964 yards on 122 catches and five touchdowns. The following season, Megatron caught 84 balls for 1,492 yards and 12 touchdowns. By all means, that is a season still worthy of a WR1 spot on a team. Another season to look at would be Julio Jones’s 2015 season when he exploded for 136 catches for 1,871 yards and eight touchdowns. In 2016, Jones was less productive, “only” catching 83 passes for 1,409 yards and six touchdowns.

Johnson and Jones still had WR1-worthy seasons following their best seasons, however, a decrease in catches and yards is a reason to reconsider locking Kupp in if you are in a position to take the first receiver of the draft. If you’re not sold, consider this. The Rams have traded away Robert Woods, but upgraded to Allen Robinson II, who is looking for a big bounce-back year after wasting away in Chicago. In addition to Robinson, Odell Beckham, Jr. still has not signed with a team, leaving the door open for a return to LA. Yes, he is coming off another ACL tear, but we have seen him come back from this injury before. More mouths to feed plus healthy running backs could bring Kupp’s production down. Like 2013 Megatron and 2016 Jones, Kupp could regress and still have a great season, just perhaps not WR1-overall level.

The Case for Jefferson

Here’s why Justin Jefferson should deserve a second look as the first receiver off your draft board. In just his second season in the league, Jefferson put up 108 catches for 1,616 yards and 10 touchdowns. With new head coach and Sean McVay disciple Kevin O’Connell installing a new offense in Minnesota, expect Jefferson to flourish in a new offense that he himself has said he loves. Before Calvin Johnson’s 2012 season, he caught 96 balls for 1,681 yards and 16 touchdowns. Julio Jones had 104 catches for 1,593 yards and six touchdowns in 2014 before putting up his huge numbers in 2015. Jefferson is also still just in his third year in the league and will likely keep improving, while the 28-year-old Kupp may be trending in the opposite direction.

With history on Jefferson’s side, he should be considered to be the top receiver taken in most drafts instead of Cooper Kupp. You can't go wrong with either guy, but if you get an opportunity to make that choice in the late first or early second round, I'd go Jefferson. Good luck and happy drafting!